A Record with a Peel

About 2 months ago, I got the inspiration to break the world record for the “orange nose push mile.” The record is for pushing an orange over a distance of one mile, with your nose! I actually held this record but, since nobody had broken it in a few years, I decided to go after it myself.

Having already done this, I knew it wouldn’t be easy. “Orange nose smack” would actually be a more appropriate name! While on your hands and knees, you smack the orange with your nose as hard as you can. Then you jump up, chase after the orange, fall back to your hands and knees and repeat the process all over again. I covered a mile like this in 24 minutes and 36 seconds. Like many Guinness records, it looks silly, but it actually requires a lot of concentration, technique and fitness. And it can be painful too. During one training session, I noticed my orange was turning red. It took me a few moments to realize that the red substance on the orange was my own blood! 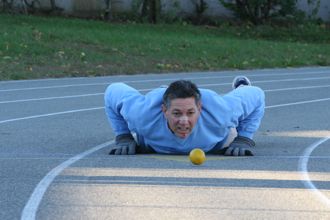 Anyway, my practices were going well, so I began looking for a venue to break the record. I needed a place with a smooth floor because, the smoother the floor, the faster and longer the orange rolls. I had originally set the record at Terminal 4 at JFK airport in New York, where the tile surface was superb. I have especially fond memories of that place since Sri Chinmoy personally visited the terminal while I was attempting the record, and I recall being so happy and inspired to see my teacher. With each lap, when I passed Sri Chinmoy, I would try to be extra soulful, a task that was made humorously difficult because every time I hit the orange I involuntarily let out a loud grunt!

Unfortunately, Terminal 4 has become much busier over the last few years and I was unable to get permission to do a repeat performance there. On short notice, the only other place I could use was the asphalt track at Queens College, a site decidedly not ideal for this particular record. It is outdoors, the asphalt surface is rough and uneven, and soccer players often run across the track. (Sounds like a bunch of excuses, doesn’t it?!) 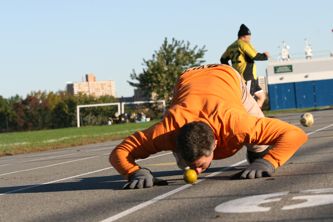 On a windy Sunday morning, I gathered the necessary official witnesses and video crew and began the attempt with a forceful smack of a hard, unripe orange. I was hoping to break the record and not break my nose! I think I got it reversed, because I didn’t break the record, but it looked like I had been in a fistfight, and lost! Several times I actually scraped my face against the pavement while trying to hit the orange! The good news though, was that even with these less than ideal conditions, I only missed the record by 11 seconds.

I remembered what Sri Chinmoy said about not giving up so I informed the official witnesses that I wanted to try again the following week. I had a plan. First, I would find an indoor venue with a smooth floor and second, I would use a green orange.

You see, while practicing for the initial record attempt in 2004, I discovered that the harder the orange, the faster the orange rolls. Of course, this also takes a toll on your nose, but I was willing to make the sacrifice. I began using less ripe oranges and my times improved. Then, I thought to experiment with an orange picked straight from the tree. I called my friend, Samadhan, who runs
a nursery in Florida, and he Fedex-ed me an unripe, round orange. It was perfect except for the fact that it was green! I wasn’t sure that Guinness would accept a green orange. (My friends joked about spray painting it orange!) However, the Guinness editor, Craig Glenday, proved that he is a wise man with a sense of humor. His decision was, “An orange is an orange, even if it’s green!”

So, for this new record attempt, I had my friend send up another green orange from Florida while I went hunting for an indoor venue. I was finally able to locate a reasonably level indoor surface at the local Green Acres shopping mall. I knew I had selected the right place because when I went into the mall manager’s office and explained what I wanted to do, the secretary burst into laughter! 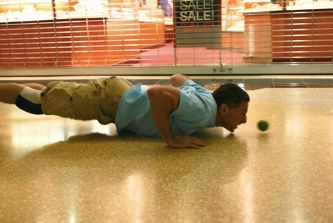 On the day of the event, I felt nervous because I didn’t want to fail again. In front of the cameras and witnesses, I covered the first half-mile in a little over 12 minutes, but I was slowing down. Deciding not to panic, at the next turnaround I stopped for a few seconds to meditate on Sri Chinmoy. Almost immediately, I discovered a new way of hitting the orange that I had never tried before. Even the witnesses noticed that the orange was suddenly picking up speed. By the end of the mile, although exhausted, I crossed the finish line in 22 minutes and 41 seconds, shaving almost 2 minutes off the old record (pending certification by Guinness).

Afterwards, I invited the cameramen, timers and support crew to a diner for breakfast. Our celebration meal consisted of eggs, pancakes and, naturally, tall glasses of orange juice which I squeezed with my nose! Just kidding!!!