My Friend Saves the Day

It’s hard to imagine that good grooming could almost ruin a record attempt, but it actually happened to me a few days ago!

I was in the Dominican Republic on retreat with my meditation group and I decided to attempt the record for walking the fastest mile while spinning a hula hoop around the waist and simultaneously balancing a full pint milk bottle on the head. The bottle must remain balanced for the entire mile, and cannot be touched in any way to adjust it. I admit, the record is crazy, but I love it. It actually requires tremendous concentration to keep the bottle balanced, especially while bystanders are laughing at you and traffic is whirring by! 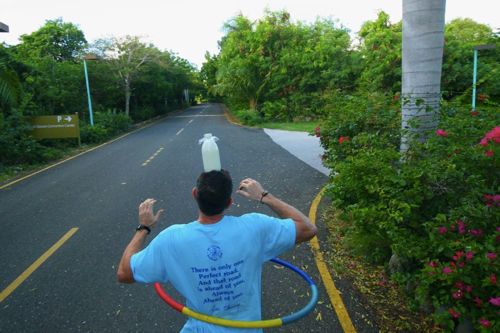 After a few practices, I was ready to attempt the record on the road in front of my hotel. A certified surveyor measured the course and, with the witnesses and camera crew standing by, I began a practice hula-balance warm up. With the hula hoop spinning, I placed the bottle on my head and, to my surprise, within 3 steps, the bottle slid right off! “It has to be a fluke,” I thought so I tried it again but, sure enough, that thing just wouldn’t stay balanced on my head.

It just didn’t make any sense. Only 2 days earlier, I had done a quarter mile trial run. When the bottle fell off my head and hit the ground, I knew that it was because I had lost my concentration. Amazingly, the bottle didn’t break, so here I was, two days later, using the same bottle, yet no matter how much I tried, I simply could not keep the bottle balanced on my head. What was different? Suddenly, the answer dawned on me. The culprit was the hairdresser!

You see, the day before I got a haircut and afterwards the hairdresser shampooed my hair. Of course, I couldn’t blame her. How could she possibly know that having soft and silky hair would destroy my milk bottle balancing ability! Anyway, I was pretty discouraged, and announced that it looked like I would have to cancel the event. However, one of my friends on the support crew, Yuyudhan, blurted out, “There’s no need to do that, just throw some dirt on your hair–problem solved.” 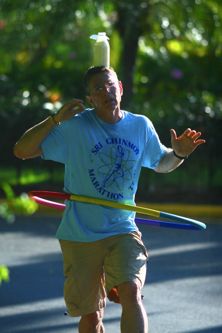 Willing to try anything, I grabbed a handful of dirt from the side of the road and rubbed it into my head. It felt weird but, you know what? That man knew what he was talking about! He is an engineer and I guess all those years of schooling paid off! The bottle stayed perched on my head like it was glued there. Well, not actually glued. Guinness prohibits using any kind of adhesive, gel or spray to help keep the bottle on your head, but having filthy hair seems to be perfectly legal! So, with bottle in place, I began rotating the hula hoop and on the given signal, took off down the road and along the way, gave the locals something to talk about!

Several times during the event, cars and trucks passed me and I got various reactions ranging from guffaws to cheers. At one point, for a few minutes, an open truck full of passengers followed behind me and I could hear the people laughing. I was happy to give them some joy even though it was somewhat distracting. However, not as distracting as the van which, towards the end of the event, was headed straight towards me and didn’t look like it was going to stop! I got very nervous and finally yelled at the driver to wake up. It’s hard to be intimidating when you look like a clown but to my relief, at the last moment, he slowed the van down to avoid me.

In the end, I managed to complete the mile without dropping the hula hoop or the bottle and, despite all the obstacles, was able to break the old record by more than 25 seconds. I thanked all the witnesses and friends but especially Yuyudhan for being so “in the moment,” so “focused”-so “in the hair and now!”