A Most Fruitful Experience

Some Guinness records, which seem absolutely ridiculous on paper, turn out to be exceptionally difficult when you actually try them. The orange nose push, pushing an orange with your nose for a mile in the fastest time, is a perfect example. When I first saw the photo in the 2004 Guinness Book of the guy setting the record, my immediate reaction was: ” No, I’m not trying that – it’s just too weird.” And that’s coming from someone who has pogo stick jumped underwater in the Amazon River and walked with a milk bottle balanced on his head for almost 24 hours!

However, my curiosity got the better of me and on a beautiful day in June, I trudged out to the track with a couple of oranges, a pair of gloves, and kneepads. Seventeen minutes and 440 yards later, I had a bleeding and swollen nose, blisters on the front and back of my knees, and a newfound respect for the guy in the photo. I also felt that with a bit of practice, I could break his time of 74 minutes. The practices went well, but, in the process, I gained even more admiration for that daring fellow. I learned it takes a lot of guts to go out in a public place and deliberately make a complete fool of yourself! When everyone around you in a crowded park is having a picnic, playing soccer or riding their bicycles, it’s not easy to become detached, get down on your hands and knees and start crawling after an orange!

Anyway, a week before I was scheduled to attempt to break the record, a friend who owns a running store in Scotland called and gave me some very timely news. It turns out that a customer, who is a world-class marathoner, had come in and announced that he had smashed the orange record by propelling the fruit for a mile in an unbelievable 44 minutes. Apparently, he had been able to slice a half hour off the record by standing up and sprinting after the orange, instead of crawling, each time he smacked it with his proboscis. 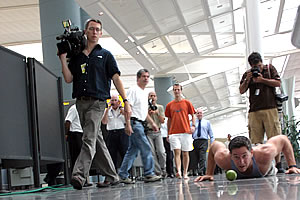 This opened up a whole new horizon for me and soon I was motoring around the track, chasing my orange in what had evolved into a serious aerobic workout. Within 3 weeks I was once again ready to challenge the record, but when I called Guinness, I was shocked to find out that for the second time in the last two months the record had been broken. It had been squeezed down to an incredible 29 minutes!

It became obvious that a track wasn’t the optimum place to set the record. The rubberized surface and the banked turns were slowing the orange down. I would have to discover a route that was flat, smooth, and straight. My friend Vinaya and I became men bent on a mission. We disappeared for days, checking out shopping malls, promenades, marinas, parking lots, construction sites and various boardwalks. We were even preparing to drive to Vermont to scope out a renovated barn when Vinaya got a brainstorm. What about the airport? There are long stretches of polished tile floors just waiting to have an orange go sailing across them. But could we get permission?

I almost quit trying after the first terminal. The lady in charge basically laughed me out of her office. But thank God for the open-minded and kind-hearted people of this world. I went to Terminal 4 of JFK airport and was welcomed with open arms. They immediately agreed to host the event and allowed me to measure out a course which I would have to cover 6 times to complete a mile. After a couple of practices, I was ready to roll, and hopefully, so was the orange.

The best orange I had been able to find was a somewhat unripe green one that my friend Samadhan had picked from his tree in Florida. After some deliberation, Guinness ruled that my choice was legal, saying that an orange is an orange even if it’s green! The official witnesses arrived and set their stopwatches, the Reuters crew switched on their camera, I meditated for a few seconds, and the race was on! The terminal was fairly empty, but even so, I still had to dodge several stunned passengers who froze in the middle of the course while trying to figure out what all the commotion was about. At one point, out of the corner of my eye, I noticed a small dog on a leash and in a flash he was chasing after the orange, probably thinking it was a ball. We both made a mad dash to the orange and he probably would have beaten me if his owner hadn’t reeled him in at the last moment!

Despite all the obstacles, including a passenger who was sprawled out at one end of the course and somehow managed to sleep peacefully through the entire event, things were going well. I only needed to maintain my pace to get the record, but with 1/3 of a mile to go, exhaustion set in and I began slowing down. Suddenly, I got a giant jolt of inspiration from an unexpected source. My meditation teacher, Sri Chinmoy, arrived at the terminal to offer me his encouragement! During every one of the 86 Guinness records I have set, I have tried to visualize my teacher, but seeing Sri Chinmoy in person was an unimaginable blessing. I was filled with energy and breezed through the last 2 laps to set a new world record of 24 minutes and 36 seconds.

It’s not an Olympic record. I didn’t win any medals, become famous or get any sponsorship deals, but training for and breaking the orange nose push record turned out to be one of the most rewarding experiences of my life.