Lately, many of my record attempts have involved balance – remaining upright while hopping on one leg, staying balanced while trying to juggle on a pogo stick, balancing an egg in a spoon while running a mile. With every record-breaking attempt, in fact, whenever anyone tries to go beyond their previous capacity, the challenge not only involves balancing outer circumstances, but maintaining inner balance as well. Often, this inner struggle can be more challenging than the outer one!

This lesson was reinforced to me when I attempted the record for milk crate balancing -balancing the heaviest vertical stack of milk crates on your chin for at least 10 seconds. This record is judged by weight rather than height because milk crates vary in size all over the world. Back in 2002, I managed to break the existing record by balancing a 20-foot stack weighing 88 pounds. Some years later, an American fellow surpassed me by balancing 89 pounds. I was certain that I could reclaim the record within a few months without much fuss. But, after a year, not only did I still not have the record, but I failed miserably in front of millions of T.V. viewers, not once, but twice, and my inner balance was tested even more! 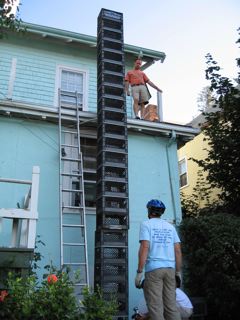 The stack of milk crates

One thing about milk crate balancing, well-it’s just not that much fun. To be honest, it’s really painful! You see, the edge of the bottom milk crate digs into your chin. You’re allowed to wear a Band-Aid to protect yourself, but it doesn’t really help. Inevitably, your chin swells severely and gets cut during every practice. For a week after each practice, I would walk around with horrible scabs on my chin, looking like I was suffering from some dreadful disease! What’s worse, supporting that much weight on your face with your head tilted back is not healthy for the vertebrae in your neck. After a few weeks of training, I started developing neck problems to go along my chin disease!

On the positive side, I got a lot of joy in seeing my progress from week to week as the stack of milk crates got higher and heavier. I started training in April of last year (2005) and by August, I felt almost ready to attempt the record, and I thought of a fantastic place to make the attempt. My meditation teacher, Sri Chinmoy, was offering a concert in Germany in September that I would be attending. I could hop over afterwards to Italy and challenge the record at the Leaning Tower of Pisa! In my mind’s eye I could just see the spectacular image of the tower of milk crates counter-balanced next to the famous leaning tower.

Alas, when I arrived in Italy, I noticed something that I hadn’t been able to see in my mind’s eye! Not only does the Tower of Pisa lean, but the road in front of the Tower is quite sloped as well, and it radically affected the mechanics of my balancing. I managed to get the stack of crates weighing 89 Â½ pounds balanced on my chin, but I could only maintain it for 8 seconds before losing control. I tried again and again, but it was no use. Reuters International News Agency was there and sent out a spectacular photo and video worldwide, but the result was a lot different than what I had hoped! 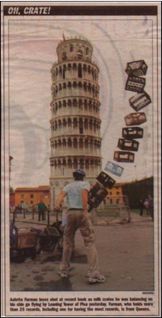 Nevertheless, I returned home full of determination and, learning from my mistake, I had a perfectly flat wooden platform built on top of my backyard patio. A few weeks later I was considering another stab at the record when, as fate would have it, a Turkish T.V. show, which was filming in New York, called me. I invited the crew to my backyard the next day and when they arrived, the conditions seemed ideal for a possible record as there was absolutely no wind. Wind is the balancer’s nightmare, especially with this record. Because the stack of crates is so high, even the slightest gust picks the stack up like a kite, and balancing becomes a major challenge.

With the anticipation of breaking a record, my friend Bipin and I did everything by the official Guinness guidelines. The crates were weighed on a highly accurate digital scale, official timers were ready with their stopwatches, and the cameramen would serve as witnesses as well as provide the necessary video verification for Guinness. After a few seconds of silent meditation, I lifted the 89½-pound stack of crates onto my chin, released my hands and finally broke the record!!! My shouts of joy resounded throughout the neighborhood. The T.V. crew was thrilled and promised to send me the videotape along with their witness statements within a few days of their return home.

A week later nothing arrived. Weeks turned into months, and after getting numerous excuses and false promises, I realized that I was never going to get the documentation I needed. I was pretty mad and decided that if I ever went to Turkey, I would track down those callous, irresponsible people and insult them mercilessly! (Oops- that sounded a little unbalanced!) 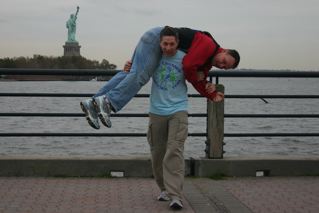 While waiting for the documentation, I began practicing for other records and, since I couldn’t bring the milk crates with me on my 3-month trip to Malaysia, I didn’t resume training for the milk crate record until March of this year. However, I did so with renewed intensity. I used heavier stacks and increased the length of each training session. I made steady progress, but something weird began to happen – after every practice I would get “brain freeze” for 24 hours. It was like I was walking around in a fog. I couldn’t remember people’s names. After one practice, while mailing some letters I unaccountably put an envelope full of blank checks into the mailbox at the same time! Luckily, some honest person returned the checks to the bank. My neurologist friend was horrified! I assured him not to worry, hopeful that in a few weeks I would break the record and be done with it. And once again the elements conspired to test my inner balance…at the end of May a popular Japanese T.V. show called Zoom In wanted to film me breaking the milk crate record live from my backyard. “Great!” I thought. This was my big chance to redeem myself in front of millions of Japanese viewers.

Sri Chinmoy has a saying, “Man proposes. God disposes.” The day of my redemption arrived and with it there was only one problem -the wind, and it was a nightmare wind! The day of the show’s filming turned out to be one of the windiest days of the year with gusts of up to 30 miles an hour. I knew that there was almost no chance of succeeding, but the Japanese had been so friendly and encouraging, the least I could do was make a valiant effort.

The moment arrived. The host of the show, in touch with Tokyo by phone, gave me the signal to start. As the satellite truck beamed the images into outer space, I went to lift up the crates and-whoosh-the crates went flying. The director in Japan quickly cut to a commercial and told us to try once more. Again the host’s cue came, and just as I lifted the crates to my chin and released my hands, another giant gust of wind hit. Moving backwards with the wind, I managed to keep the stack balanced for a few seconds, but calamitously toppled off the newly built platform and wildly stumbled into the backyard fence with the crates crashing down all around me! It was yet another dramatic failure, although I had fun and, I’m told, the Japanese morning television audience was highly entertained! 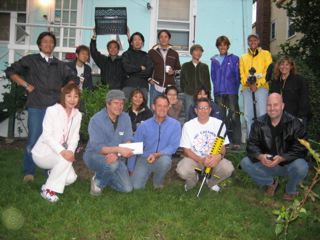 Vinaya, Bipin, Ashrita, and the kind people from Japan

At least I could sense that the record was within my grasp. At the beginning of June, I was ready to attempt the record once again in my backyard. This time, I was certain to put all the pieces in place. I lined up the proper witnesses and timers and I had a video-buff friend video the attempt so we could send Guinness the proper visual documentation. I meditated a minute and then I lifted the crates to my chin, released my hands and -yes, broke the record by balancing 91.5 pounds for 11 seconds. I was beaming – the record was done-or so I thought.

A few days later, my video-buff friend submitted a copy of the milk crate footage to the Japanese Zoom In people who had been so nice to us. He also sent me a copy. When I looked at it, I started to laugh. This was a good joke. The footage only showed my face with one milk crate visible in the frame. I was amazed at his technical skill, that he could alter the footage so convincingly. And I was even more amazed (actually, shocked is a better description) when I found out that he hadn’t altered the footage! I guess he was trying to be artistic, but there was no way I could send it to Guinness. Once again, the record didn’t count!

Outwardly I didn’t get too upset at my friend, although maintaining my equilibrium wasn’t easy. I patiently explained that it was imperative for verification that he gets the entire stack of crates in the shot so Guinness wouldn’t think I was trying to perpetrate an elaborate hoax!

A few days later we attempted the record again. I could only manage 9 seconds. My video friend was devastated. I consoled him and told him not to worry, but I wondered to myself whether I had peaked. Maybe my neurologist friend was right. Maybe the brain freeze was affecting my coordination. I pushed my doubts aside and several days later, tried once again. Thankfully, I held on for the mandatory 10 count and broke the record. All the witnesses ran over to see the video playback. No! It can’t be!! My friend missed the shot again!!! In order to get the whole stack in the frame, he panned up the stack just when I was releasing my hands from the crates. Since it was unclear exactly when I started balancing the crates on my chin, the video couldn’t be used to verify that I had balanced the crates for more than 10 seconds!

I felt terrible for my friend. I tried to reassure him that it was just an innocent mistake and that he would get it right next time. I didn’t know whether to laugh or cry, but I finally realized what a dope I had been! Why hadn’t I arranged for two video people? It must have been the brain freeze!

One more week passed and with it one more attempt. This time I didn’t think at all about success or failure. I looked at a photograph of my meditation teacher, cleared my mind of all thoughts and left the result in God’s Hands. And maybe that was the lesson I needed to learn because everything worked perfectly-the stopwatches, the videos, and even the weather! I was able to balance a 93.7-pound stack of milk crates for 11.23 seconds to set the new official Guinness record. For a few brief moments, I finally felt what it was like to be in perfect balance! 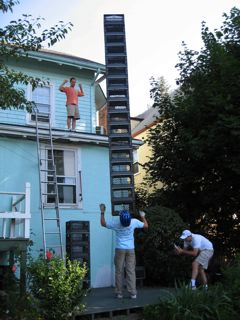