An Adventure in Eggs

We were in trouble. It was a beautiful day in May and Bipin and I were in Budapest, Hungary. In 10 minutes we were to attempt Guinness record for raw egg catching in front of thousands of kids. The guidelines for the record were quite simple. Two people stand 16 feet apart and one person throws raw eggs at the other person who tries to catch as many of the eggs in a minute without breaking them. The current record was 71 eggs and Bipin and I had done more than that in practice in New York, so we thought it would be “over-easy”. But our confidence was “cracked” when, just before going on stage to make our attempt, we did a trial run. Bipin was throwing the eggs as normal but, for some reason, when I tried to catch the eggs, they exploded in my hands, and I was being “shelled” by raw eggs! 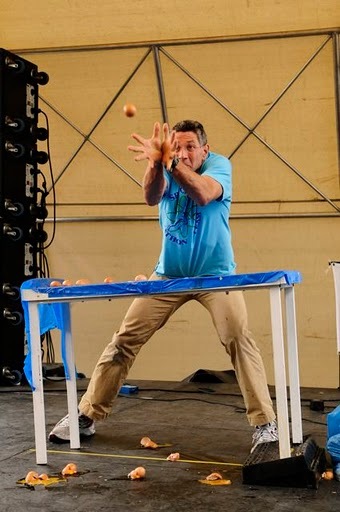 We tried using different batches of eggs, but the results were the same. For some reason, Hungarian eggs are not as strong as American eggs and, in front of national TV and a few thousand kids, I was about to get egg on my face, literally! I remembered that my mentor, Sri Chinmoy, taught me that through meditation it is possible to surmount any problem. After a brief meditation, an idea popped into my head. I ran over to Parimal (one of my Hungarian friends) and asked if he could find us a couple of hundred organic eggs in a hurry! I hoped that organic eggs might have stronger shells.

With these eggs though, Bipin and I had the horrible feeling that we were “poached”. We climbed up on stage and took our positions. Looking out at the enormous parking lot in front of us, we could see the expectant look on the kids’ faces—thousands of ‘em. 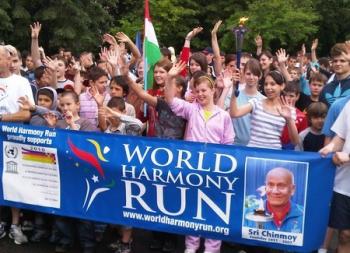 This year, the Hungarians, inspired by Makaranda, had the idea of inviting kids from all over the country to try to break the record for creating the largest drawing done by the most kids. The theme of the drawing was “world harmony through love of Mother Nature”. Bipin and I were facing some 8,000 kids who had bused in from all over the country, and were drawing on massive sheets of paper spread out in the parking lot in front of us. It was an amazing sight. 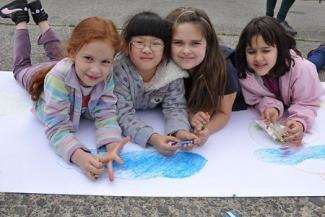 The time for our record attempt was upon us, and we had no choice but to use the standard eggs. Our first attempt didn’t go that well. As Bipin fired the eggs at me, I gingerly caught them and placed them on a padded table. At the end of the minute, the official witnesses counted up the unbroken eggs. I had only managed to catch 70 eggs, one short of the record. There were broken eggs all over the place. We “scrambled” to clean up the mess and tried again. This time the results were worse. After 4 attempts, Bipin and I were just about “fried” when we got the news that the organic eggs had arrived. We begged the organizers to give us one more chance and they agreed.

The timers gave us the signal to start and Bipin entered into “the zone”. His accuracy was incredible and the eggs did seem stronger. As soon as the timers told us to stop, I knew we had broken the record. When the officials announced that they had counted 75 unbroken eggs, a big cheer went up from the audience. Bipin and I were so relieved and grateful, definitely a “sunny-side up” feeling!

After the record, Lazlo, one of the organizers, arranged interviews with the press and I was amazed by the depth of their questions. Usually, the media is not very interested in the inner aspect of my records, but in Budapest every interview was focused almost entirely on my meditation and the philosophy of self-transcendence. My dear friend, Gunagriha, who offers lectures all over Hungary, had told me that his countrymen are receptive to spirituality, but still I was surprised. Later that day, Agada, an English Channel swimmer, and I had a radio interview with Zsuzsa Csisztu, the well-known former Olympic gymnast. We spent the entire hour talking about the power of meditation!

I came away from my trip to Hungary, full of positive energy and I even promised to come back and do a record with Gunagriha and Marami’s dog, Beauty! When I returned home, I was so inspired that I decided to do something constructive with all of the leftover eggs from our egg catching practices. A few years ago, I set the record for balancing the most eggs on end simultaneously and I began practicing to break it. After weeks of balancing eggs on my kitchen floor, I went to a nearby college and managed to surpass the record by keeping 888 eggs balancing all at the same time. I enjoyed focusing so intensely for hours on end and became completely absorbed in the challenge. In fact, the entire month, beginning with the catching record in Hungary and ending with the balancing record in New York, proved to be a most eggstraordinary eggsperience!