Easter Island and the Three-Toed Sloth

One of the many things I love about the Guinness Book of Records is that I can almost always find some new event I have never seen or heard of before, and this inspires me into new frontiers of exercise. I’ve derived hours of fitness training and fun from such discoveries as star jumping, orange nose-pushing, frog-jumping, can and string-walking and upside-down juggling. 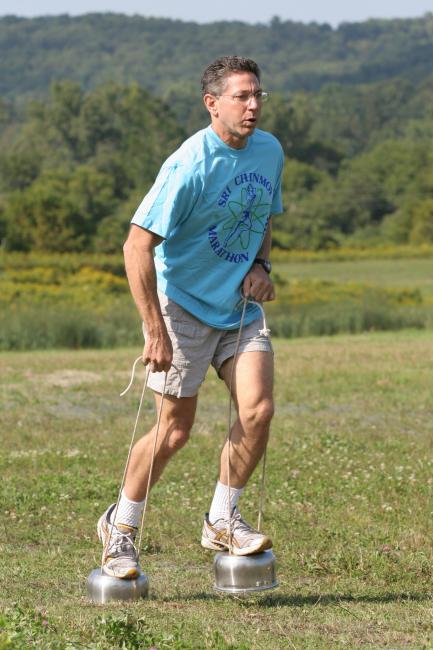 It is truly a joy practicing new events and experiencing my progress from day-to-day and week-to-week. As my meditation teacher, Sri Chinmoy, says:

When my heart sings the song of newness,
My life becomes the dance of fullness.

Recently, the Guinness people began posting a database of records on their website, and it has been a goldmine of inspiration for me. Okay…some of the new categories are silly – like the record for the fastest time to blow a postage stamp for 100 meters. Other categories sound silly, but are actually quite difficult– like the record for jumping the longest distance on a pogo stick while juggling 3 balls. This seemed tailor made for me so I decided that I would try to break it, and I wanted to do it on Easter Island!

It has long been a dream of mine to visit Easter Island, but finding the time to go has been a challenge. Part of the mystique of Easter Island (called Rapa Nui by the natives) is the fact that it is so hard to get to. The island is in the middle of the Pacific Ocean, 2200 miles off the coast of Chile and is the most isolated inhabited spot in the world. For most of my record-excursions, I plan on 3 or 4 days including travel time, but Rapa Nui required double that. This year, my annual Christmas retreat this year took me to Columbia, South America, and this 3 week sabbatical afforded me the opportunity to make a side-trip to this remote island.

With great anticipation I flew into Cartegena, Columbia in mid-January and met up with my friends Sanjaya and Jowan who were going to accompany me on the trip to Rapa Nui. Cartegena is charming, but it was difficult to appreciate since I was so focused on the upcoming adventure. That is, until I discovered the oso perezosos! While walking in the courtyard of my hotel, I spotted one of the strangest looking animals I had ever seen hanging off a palm tree. It looked like a type of monkey but moved in slow motion like a turtle. It was what the Columbians call an oso perezsoso, translated literally as “lazy bear”, but more commonly known as a three-toed sloth.

It turns out that there were some 20 of these fascinating animals living on the hotel grounds and, being an avid animal lover, I couldn’t stop thinking about them! Because they are so slow and vulnerable, they stay mainly in the trees and eat the leaves, but sometimes they come down to munch on other greens. One evening, I found one crawling on the ground and very carefully picked him up. He held onto me with his 3 toes, and at that moment I knew that I had to break a record with a sloth! What record? Why, blowing a postage stamp for 100 meters, of course! Having a sloth attached to me would make it a real challenge! But this would have to wait until I returned from Rapa Nui.

The expedition to Easter Island was a lot smoother than we thought it would be. The original sea-faring Polynesians, who are believed to have populated Rapa Nui more than 1500 years ago, probably took 3 weeks to cross the ocean so who were we to complain? After 4 flights – 17 hours of travel – Jowan, Sanjaya and I were breathing in the balmy air of the South Pacific. And, to my joy, my pogo sticks made all the connections and showed up in the baggage claim! 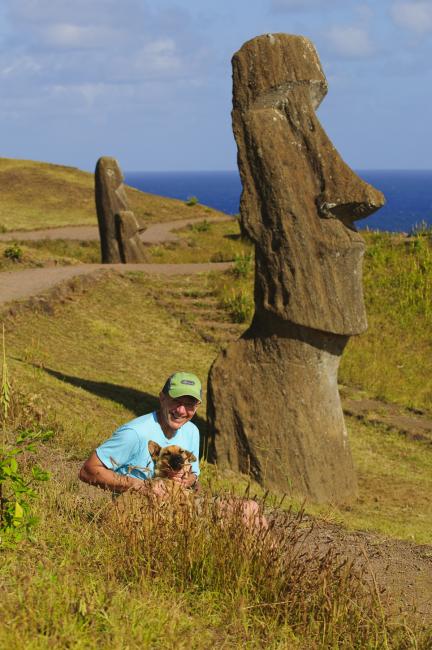 I was immediately struck by the unspoiled beauty of the island. There are only about 5,000 people living on Rapa Nui and they are actually outnumbered by the 7,000 horses who make Rapa Nui their home. There are also hundreds of dogs roaming free. It amazed me at how friendly and healthy the dogs are even though they don’t have individual owners. Everyone seemed to live in harmony with each other. Although some small concessions to the modern world had been made (like allowing a long runway at the airport to be built by NASA for a possible landing by the Space Shuttle in case of an emergency), the islanders have resisted opening up their country to large-scale tourism.

Easter Island is also famous for its collection of statues called moai. I had no idea that they were so big. There are more than 800 moai situated around Rapa Nui and some are 30 feet high and weigh more than 70 tons!

Within a few hours of arriving, we found a guide, Ludo, who spoke fluent English and who took us to a perfect venue for the record. The place, called Ahu Tongaiki, has 15 statues of the deified ancestors facing a road which was ideal for pogo stick jumping. I confess that I didn’t feel any great spiritual connection with the statues, but it was exciting just seeing their immensity and speculating on how members of the different ancient clans transported the moai across miles of hilly terrain around the island. With everything in place, we planned to attempt the record the next morning.

We were up at dawn the next day and made our way off to the site. A professional surveyor measured out a course and, with the required video cameras rolling and witnesses ready to record my laps, I began juggling and hopping – two of my favorite activities. I had to cover at least 2 miles to set the record. The juggling has to be continuous, but if you drop the balls you are allowed to get off the pogo stick, retrieve the balls, and remount the pogo stick within 10 seconds. 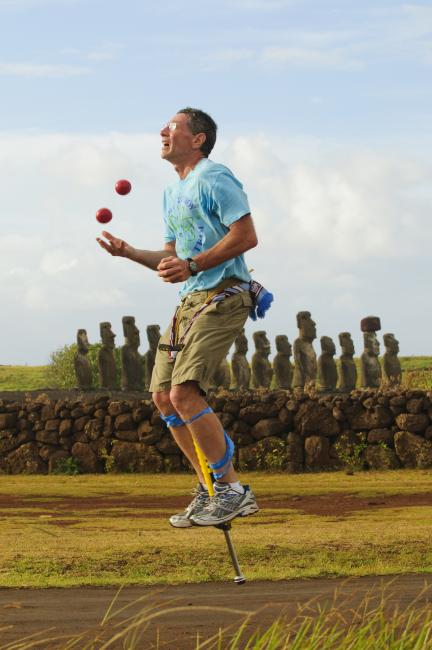 After only one mile I was pretty tired. When I reached a mile and a half, the wind picked up making the juggling harder and I was struggling to hang on. I began praying and suddenly an enormous wave of gratitude rose up in my heart. I could sense my teacher, Sri Chinmoy, inspiring me and giving me energy. I also had the feeling that perhaps the spirits of the moai were encouraging me. At the 2-mile point, much to the surprise of the witnesses who expected me to stop, I felt refreshed and managed to jump for another hour to finish up with just over 4 miles.

I was thrilled not only to become the first person to break a Guinness record on Rapa Nui, but more so for the experience of self-transcendence. The next day, hoping to inspire the kids of the island to transcend themselves, I donated the 5 pogo sticks that I used to the Ministry of Sport. During the ceremony (photos of which will eventually appear in the only newspaper on Rapa Nui which comes out once a month!), the minister joked that the kids would start practicing right away to break my record. I replied that I hoped they did because that would give me an excuse to return to their exquisite island and try to get the record back!

After a day of sightseeing on Easter Island, we made the long trip back to Cartegena and all I could think about was Pepe, the sloth. I actually met Pepe before I made the trip to Easter Island. Knowing that I couldn’t depend on the resident hotel sloths to be “on-call” for a record, I managed to locate a local Cartagena resident who owned a pet sloth named Pepe. I arranged a practice with Pepe and he was totally comfortable holding on to my arm as I made a fool of myself crawling on all fours, blowing the stamp down the hotel corridor! 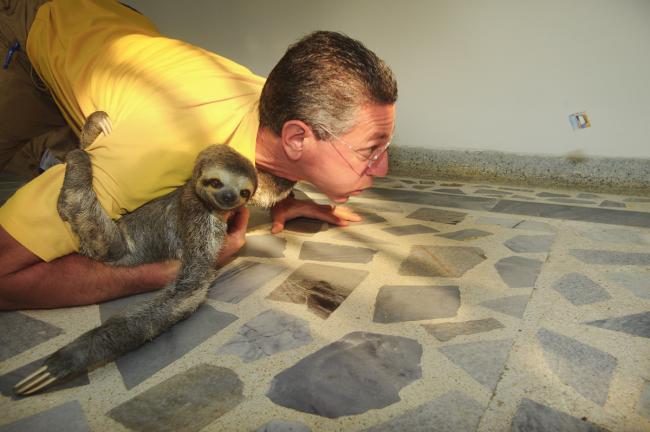 Now that I arrived back in Columbia, it was time to call Pepe’s owner, inform the witnesses and media and attempt the record for real. The attempt went well and, needless to say, Pepe was the star of the show! About half way through, I could tell Pepe was getting a little tired (after all, sloths aren’t known for their high level of activity), but he came through like a pro. And, although I was a mess with bleeding knees and elbows and dripping with sweat, Pepe seemed quite unruffled. In fact, you might even say that he had a look of bemusement on his face. Maybe Pepe was thinking “and people say I’m strange!” 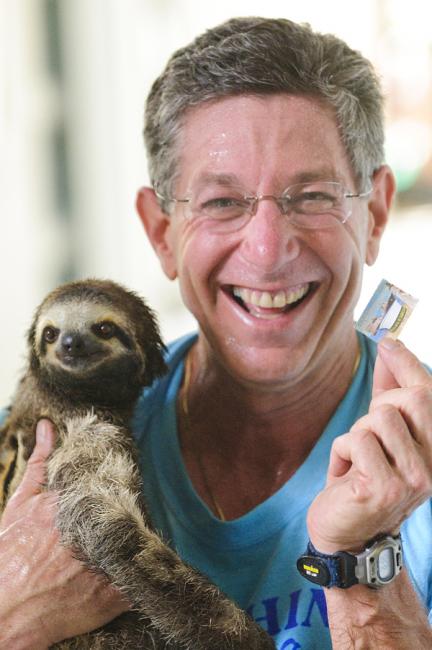 Or, maybe Pepe was appreciating the fact that sloths, like people, need some new challenges every now and then to make life more enjoyable!