Having a Ball on the Great Wall 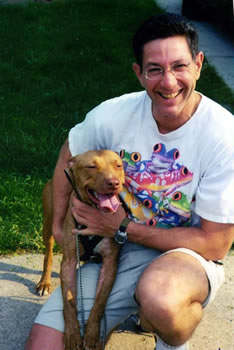 But don’t get me wrong – I have gotten respect in my life – at least twice that I can remember! A few years back, I was dog-sitting a wonderfully gentle but impressive pit bull. We went out for a walk one day and as we passed a neighborhood teenager and made eye contact, I noticed a strange look in his eye. It was blocks before I was able to identify that unfamiliar look – yes, it was respect! On another occasion I was training for the crawling record at a local track, and after a few grueling miles I suddenly noticed someone’s feet blocking my path. The twenty-something wise-guy quipped, “Hey, haven’t you outgrown crawling yet?” I was impatient to continue so I decided to stretch the truth a little and replied, “Oh, this is just some martial arts training I do from time to time to keep myself sharp.” The poor guy couldn’t apologize profusely enough and backed away with urgent and genuine respect!

As much as I enjoy appearing silly, while in China this winter I thought it would be more appropriate to attempt something more dignified at the Great Wall. I had been practicing balancing a pool cue on the tip of my finger while walking, and if I could cover more than 5 miles without the cue stick falling off it would count as a new record. Okay, it’s not that dignified, but it’s a lot better than my only other choice which was to bounce on a kangaroo ball (also called a spacehopper) for a mile in the fastest time. Guinness had established the category but no one had actually successfully done a mile yet. A kangaroo ball is one of those large air-filled rubber balls that kids sit on and hop around on while holding on to the handles.

A friend and I flew into Beijing to scout out a good location at the Wall and test the pool cue option with the idea of doing the record a few weeks later. We found a flat spot, and for 300 yards I was balancing the pool stick like a pro. But just as I was getting confident, a massive gust of icy wind sent the pool cue flying off my finger and along with it all my hopes for a dignified record. 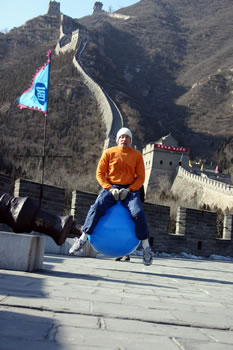 The next day I began training on the bright blue kangaroo ball in earnest and I was amazed at what great exercise it is. So what if you look like a fool on the thing! Even though I have a large 2 ½ foot version, it still is an intense leg, shoulder, arm and abdominal workout. In mid-January I felt ready to make the attempt, and a team of friends and witnesses converged on the Great Wall to set up a mile course on one of the ramparts amidst the ancient cannons. I would have to negotiate the course in less than 20 minutes for the record to be officially recognized. Although we had 2 spare balls, I was concerned that wouldn’t suffice since the worn down paving stones were full of sharp ridges which could easily puncture the ball. We also didn’t know how the subfreezing temperatures would affect the bounce of the ball or its ability to withstand high pressure. I had already had the experience of a ball exploding underneath me, and although it was cool seeing stars in front of my eyes when I hit the ground, my knee didn’t appreciate the experience that much! 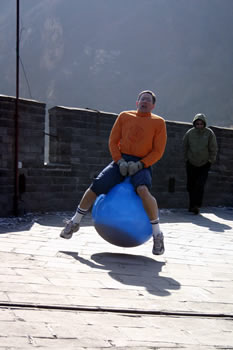 In order to release my mind from exploding balls and other possibilities of failure, I meditated for a few minutes just before the attempt and strongly felt the inner blessings of my teacher, Sri Chinmoy. As I approached the starting line, Gaia, a reporter who had interviewed me for a major Beijing newspaper, assured me that everything would be fine and, as it turned out, she was prophetic. The ball survived the entire mile and I was able to get good speed, gasping over the finish line in 15 minutes and 3 seconds. Afterwards, Gaia and her colleague invited me and my friends to a vegetarian restaurant where I was treated like a celebrity by the staff and management, complete with posing for photographs and autograph signing.

Although I appreciated their kindness, it made me made me think about the whole respect issue and my last practice on the ball. I was bouncing along the sea road in Qingdao and I remember passing quite a few people who smiled at me, but one old man in particular caught my attention. He was impeccably dressed in a dark business suit and didn’t seem to even notice me, but as soon as I passed him I heard a loud guffaw. I immediately turned my head and was thrilled to see the elderly gentleman doubled up in uncontrollable laughter!

That recollection confirmed what I already knew. Respect is all right and I could probably get more if I stuck to more traditional sports, but I’d much rather be unconventional and spread joy and maybe a little inspiration to my fellow human beings. And, on the outside chance I ever feel the need for some respect, I can always go out and borrow my friend’s pit bull for a day or two! 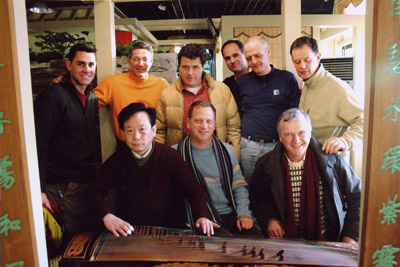 Photo: Ashrita and friends at a Beijing restaurant