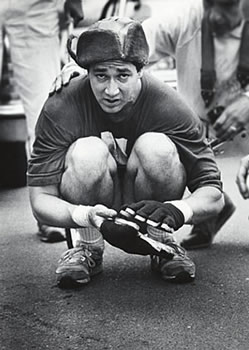 This is a grueling event – don’t try this at home! You are allowed 5 minutes’ rest after each hour of rolling. The unofficial rule is that you must roll continuously, but you are permitted brief stops to throw up! Unfortunately, I had to avail myself of that rule — many times!

After breaking the jumping jacks record in 1979, I noticed that the somersault record was listed directly underneath in the gymnastics section of the Guinness Book. “Wow”, I thought, “it would be cool to have 2 records right next to each other.” However, after attempting several rolls my enthusiasm quickly diminished. Some nut had rolled 8.3 miles! But over the next several weeks it kept bothering me that I had given up because I sincerely believed that if another person has done something extraordinary, so can you.

So I went out at 2 a.m. to a nearby track to practice. I chose that time because I didn’t want people in my neighborhood to think I was crazy; but the plan backfired. Some poor, innocent guy walking his dog came upon me and dashed off in shock despite my protests that I was normal! Anyway, I managed to complete a quarter of a mile and staggered home dizzy, nauseous, bruised, covered in dirt and glass, but totally thrilled with my self-transcendence. 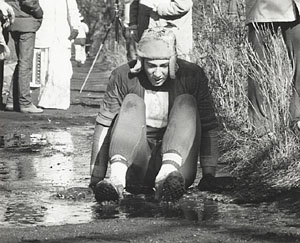 I went on to roll 10 mile Park in New York, and several years later (since nobody had broken the record) rolled 12 1/4 miles along the length of Paul Revere’s historic ride in Massachusetts. It was the hardest record I ever set. When I told Regis Philbin about it he observed: “We (finally) found a guy crazy enough to break Ashrita’s record and it was him!”

Somersaulting Fastest Mile
This event, the fastest time covering one mile while doing forward rolls, is difficult because you have to constantly push yourself while the world is spinning out of control around you.

I first set this record in Washington, D.C. a few years ago. James Carville, former Democratic President Clinton’s friend and advisor, happened to spot me as I rolled by the Smithsonian Institute. Recognizing how brutal the activity was, he quipped:

I believe in giving political parties equal time. The next time I attempted this record, the event was covered by the British (BBC) Recordbreakers program. The host of the show, who kept yelling out words of encouragement, happened to be Ron Reagan, the former Republican President’s son!