Way back in 1974, after a meditation with his students, Sri Chinmoy invited us to suggest a spiritual quality. He then composed an aphorism especially for each of us around that quality. When my turn came, I suggested the quality “grace”. Sri Chinmoy meditated for a few seconds and then in a melodic voice, he composed an aphorism. I have learned so much from that aphorism and yet there have been times when I have forgotten those valuable lessons. 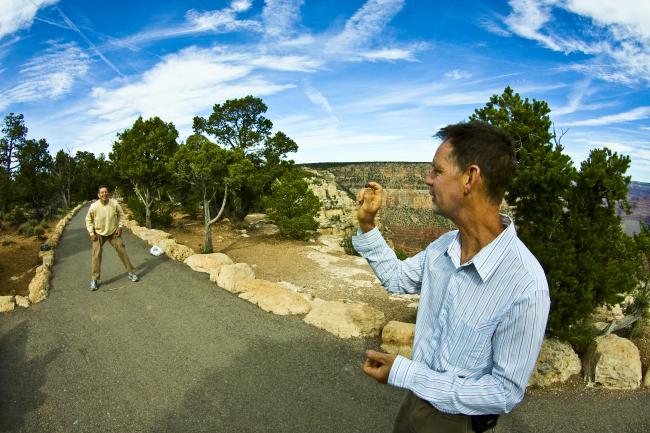 Regular readers of this blog are familiar with my good friend, Bipin, who often breaks records with me. This past July, Bipin and I were looking for an adventure and we decided to go to the Grand Canyon to attempt the 3-minute record for catching the most grapes in one’s mouth thrown from 15 feet away. Bipin is the thrower and he is a virtuoso at throwing small objects, especially fruit, very rapidly and with pinpoint accuracy. Upon our arrival at the Grand Canyon, we were awed by its beauty and vastness. That evening we explored the area for a suitable record-breaking location and decided to attempt the record the next morning right on the walkway of the Canyon’s South Rim overlooking the vast panorama.

Shortly after sunrise, in front of witnesses and a local newspaper reporter, Bipin and I started warming up for our attempt and we quickly realized a major flaw in our plan – we did not account for tourist traffic! The record requires utmost concentration, but every few seconds tourists would walk by asking questions, or wishing us good luck! When at last we resigned to move to a quieter, less dramatic site, a really nice couple offered to stand at either end of the walkway to request the passersby to kindly wait until our record was completed. The lady actually used her baby carriage as a blockade, but she was so nice about it that nobody seemed to mind! 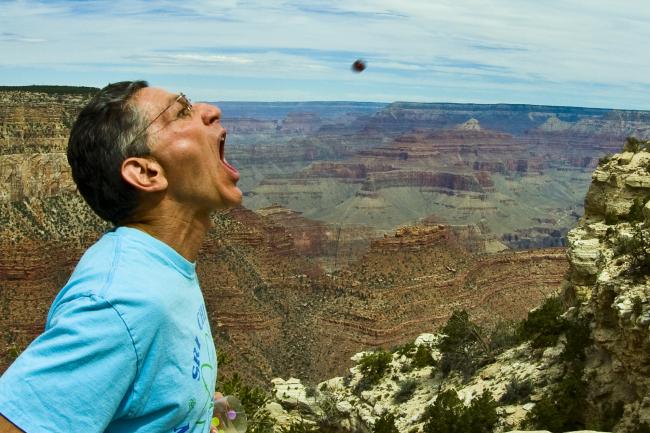 Amidst all this positive energy, Bipin and I were able to break the grape catching record and we celebrated by hiking down the Canyon later in the day with another friend, Gregor, who had joined us for the journey. We camped in the Canyon overnight, and after our climb back up the next morning, we all felt so invigorated that we decided to drive to Monument Valley and attempt another record there!

Because I was practicing for another record, I had brought a sand wedge golf club and golf ball with me. The record is for walking the longest distance while continuously bouncing a golf ball off a golf club – similar to what Tiger Woods does in his famous TV commercial. When we arrived in Monument Valley, we were delighted to find, smack in the middle of the desert, a high school with a running track, ready for a record attempt! 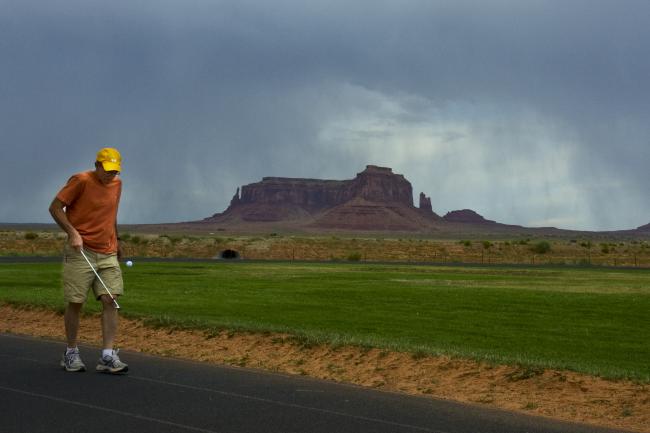 However, as usual, nothing ever goes exactly as planned. In the middle of the attempt, the wind decided to exert its considerable influence. I was having trouble bouncing the ball on the golf club. And then, I noticed something unusual. On the infield of the track some Native American kids were playing on the infield, when very suddenly they all laid flat on the ground! And then, within seconds, a huge sand storm descended on the field. I could barely see the golf ball let alone keep it bouncing on the golf club! Everyone ran to their cars for cover, and we waited out the storm in amazement.

After about 20 minutes, the storm subsided. We dusted ourselves off and, despite earfuls of sand, got back on the track as if nothing had happened. I was finally able to break the record, going more than half a mile while bouncing the golf ball. I was filled with gratitude for being able to set a new record in such a stunning natural environment. 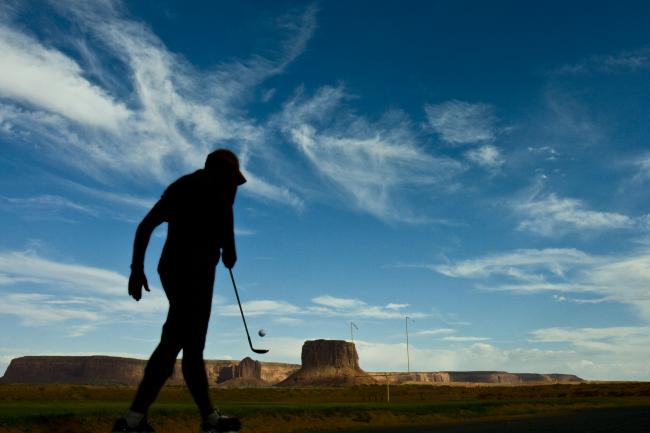 When we returned to New York, Bipin and I were so encouraged by our grape catching success out West that we decided to tackle the record for the most grapes thrown and caught in the mouth in one minute. The record was 77 grapes. This record is much more challenging than its 3-minute cousin, because there is much less room for error. We began practicing in earnest and, within a month, in front of a video camera and witnesses, we were able to break the record by two grapes. We couldn’t believe it – it was almost too good to be true. Unfortunately, in fact, it was! Later that day, we found out that the record didn’t count!

Since Guinness can’t send out adjudicators to witness all of the records, they require witness statements and video documentation for every record attempt. In the case of grape catching, the video footage has to clearly show every grape being caught. When Bipin and I reviewed the video footage of our 79 grapes, we were shocked. Even in slow motion, because of the dark background and size and speed of the grapes, the grapes were virtually invisible on the video. All you could see was a minute of me opening and closing my mouth!

Disappointed, but knowing the record was within our grasp, a few days later we set up another attempt. This time, we taped up a white background and had our friend Mridanga film the event with a special high definition camera. The good news was that on the video worked perfectly. The bad news was that the video captured me perfectly catching only 77 grapes. 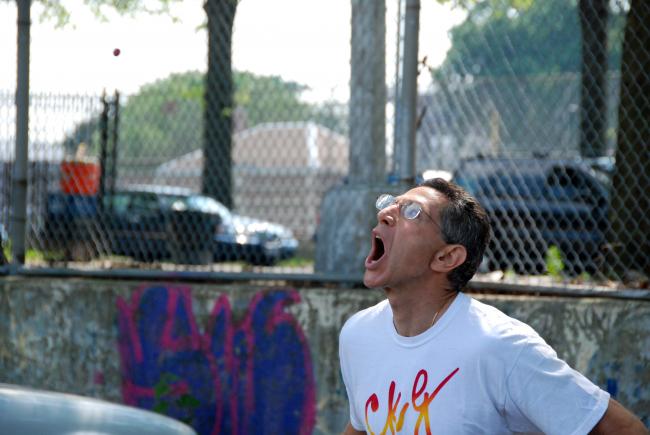 I was frustrated and I decided that the solution was more intensity. Bipin was throwing enough grapes but, during the course of the minute, I was carelessly missing 2 or 3 of them. So, a few days later we rounded up all the witnesses and camera people and tried again. I went into the event with tremendous intensity, but it made no difference at all! We failed again and, despite my fierce determination, I still only managed to catch 77 grapes!

After reflecting on what happened, I realized my crucial error – I had forgotten the most important part of my preparation. While immersing myself in the need for more concentration and focus, I failed to invoke God’s Grace to transcend my limited capacity. For the next few days, instead of praying for more intensity, I prayed to be receptive to God’s Grace and to be a surrendered instrument to God’s Will.

A few days later, Bipin and I made our 3rd attempt, and by God’s Grace, I managed to catch 80 grapes. Bipin’s throwing was incredibly accurate and I could feel Sri Chinmoy’s blessings throughout the attempt. 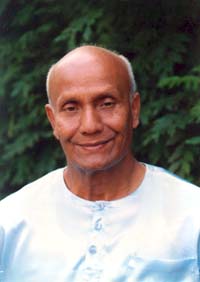 With deep gratitude I recalled the aphorism about Grace that Sri Chinmoy had composed in 1974:

Although grape catching is an admittedly silly pastime, I feel so fortunate to have relearned such an important life lesson. And, just recently, I came across another of Sri Chinmoy’s profound aphorisms about Grace:

Without the Grace-Power,
Everything is out of reach.

With the Grace-Power,
Everything is within easy reach.