The most continuous hours clapping. 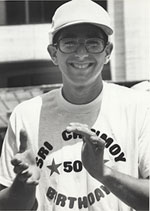 You have to clap an average of 160 times a minute and the claps have to be audible to the official witnesses who are situated 120 yards away. You are allowed 5 minutes of rest after each hour of clapping.

This event is a challenge because you have to clap very fast and very loudly for more than 2 days!

The record at the time I spotted it was 42 hours and I had the “brilliant” idea of clapping for 50 hours in front of the Lincoln Center in New York City to honor my meditation teacher’s upcoming 50th birthday. Unfortunately, my choice of location was a disaster. I was in the middle of one of the noisiest cities in the world competing to be heard. After 15 hours of pounding my hands together I had to give up. I felt even worse the next day when I read the newspaper. The New York Times had never covered any of my successful record attempts and, of all times, they chose to report on my first flop.

When I told my teacher about my failure he simply said “practice more.” There was power in those words, because during my next practice session an idea suddenly popped into my head that I thought was truly brilliant. Sound carries better over water, so why not clap at one end of a pond or lake and have the witnesses at the required distance at the other end? I checked with the people at Guinness who had no objection, so 2 weeks later I set up my chair under a towering oak tree at the edge of the quiet Goose Pond in Jamaica, Queens with the witnesses camped out across the water.

It was probably the most peaceful record I ever set and I was thrilled to finally give my mentor a 50-hour ovation. Also, to their credit, The New York Times ran a follow up article entitled “One Small Hand For Mankind.“