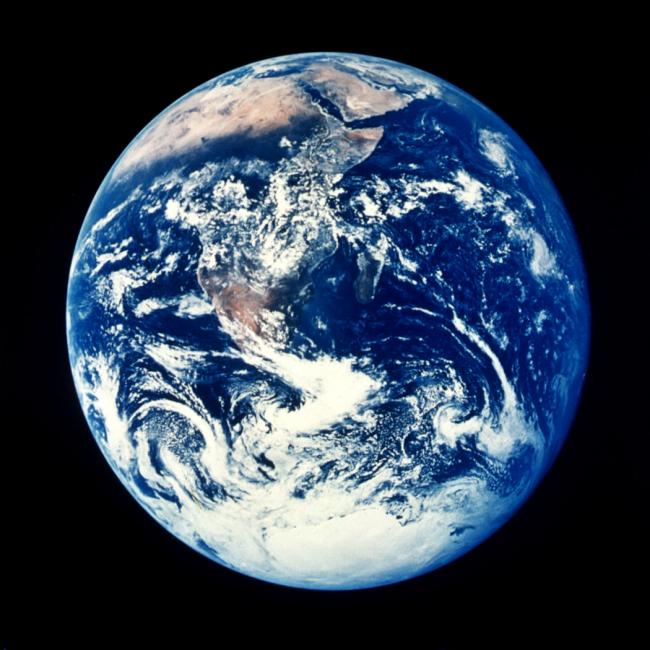 There is something about standing on a ball and balancing that gives me joy. I don’t know why – maybe it’s the challenge or maybe it’s because it’s so cosmic and looks so cool. Balancing on a ball, to me, is a form of performance art. In fact, several years ago, while looking for a venue to break the record for the longest time standing on a Swiss Ball (the large, rubber air-filled exercise balls found in gyms), I approached the Museum of Modern Art here in New York City. I suggested that I might be dressed all in red and balance on a bright yellow ball on the sidewalk outside the museum. They didn’t take my idea seriously, but I still can’t understand why! 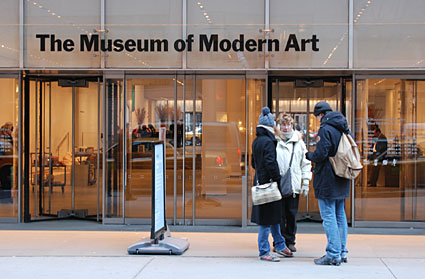 Anyway, a few months ago, I discovered that Guinness had created a new category for standing on a different kind of ball – a rolling globe – and I was intrigued. A rolling globe is a hard plastic ball often seen in the circus with performers balancing on them while slowly making their way up and down ramps. I figured that balancing on a globe would be easy since, unlike a Swiss Ball, it is stable. I ordered a 24-inch rolling globe from a circus supply company and, when it arrived, I was in for a rude awakening. I guess the rolling part of “rolling globe” is there for a reason! I could only stay balanced on the ball for a few minutes and discovered that, besides being a workout for the quads and abs, it is torture on the arches of the feet! 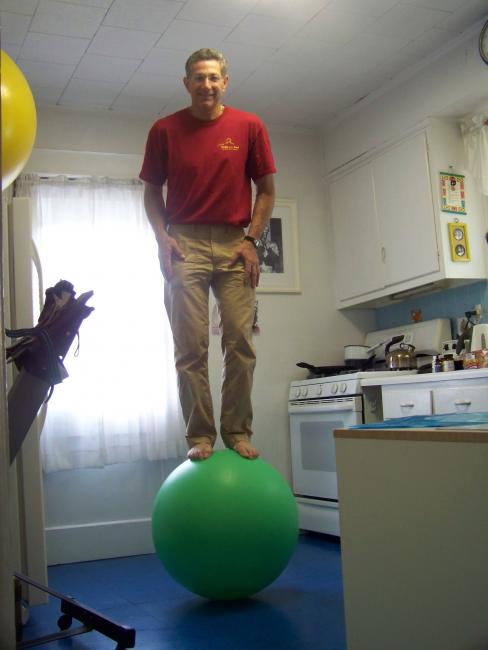 Over the next few weeks I kept practicing standing on my lime green circus ball and I reached a plateau of about 25 minutes. Just around that time, I was finalizing plans for a trip to Italy. Lately, every year I travel to Italy to visit my good friend Priyadarshan. While I’m there, I do some sightseeing, partake of the exquisite food and attempt to break a record. Priyadarshan and I had talked about doing a record at Pisa and I could just imagine balancing on the ball in front of the Leaning Tower. I was certain that the Italians, of all people, would appreciate good performance art when they saw it!

When I called Priyadarshan, he was thrilled with the plan, but suggested that I also think about breaking a record in Florence since that historic city is so close to Pisa. I jumped at the idea and told him that I had been experimenting with another new Guinness event – frog hopping for 100 meters. Depending on how my training went, we decided that I might switch things around. I could attempt the frog hopping record on the big lawn in front of the Leaning Tower at Pisa and, a couple of days later, balance on the rolling globe in Florence – possibly in front of the replica of Michelangelo’s famous statue of David in the Palazzo Vecchio! 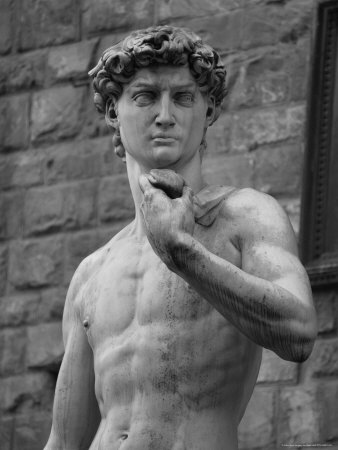 I could barely contain my excitement and began practicing the frog hopping in earnest. Frog hopping involves crouching down and wrapping your index fingers around the big toes of your bare feet and hopping. You can’t let go of your big toes at any time. I already have the record for the 10-meter record, but this record is 10 times as long and about 50 times more difficult. My practices were exhausting since frog hopping intensely exercises the quads, abs and muscles of the feet. Does that sound familiar? There was a serious problem looming ahead and I had no idea it was coming.

I had taken a break from training on the globe since I only had to balance for 15 minutes to qualify for the record and I had already done more than that in practice. In fact, I was so confident, I went through the expense of purchasing another ball (this one was orange) and had it shipped to Priydarshan’s house in Italy to avoid the hassle of trying to get the ball checked onto the plane. A couple of weeks before my trip, I decided to do a final practice on the ball at home and something weird happened. I couldn’t stay on the ball for more than a minute. I thought it was a fluke and I tried balancing again, but the same thing happened. Suddenly, I had two left feet and neither one would stay on the ball! I was in trouble! 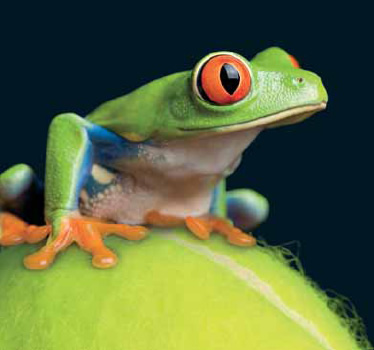 It wasn’t long before it dawned on me what the cause of my lack of coordination was. It was the frog hopping! (It makes sense, have you ever seen a frog balancing on a ball?) Balancing on the globe requires the constant subtle corrections of the feet, abs and quads. Apparently, I had burned out all those muscles doing the crazy frog hop. The only thing I could do was cut back on my training and hope that my body would recover in time.

The days sped by and, before I knew it, Priyadarshan was picking me up at the airport in Florence with the bright orange globe stuffed in the back seat of his car. I was eager to test out my balance. We rushed to the hotel and lugged the ball upstairs to the hotel lobby. My friend helped me up onto the ball and, to my relief, I felt stable. I was able to balance for more than a minute before one of the hotel staff politely, but firmly, asked me to get down! Encouraged, Priyadarshan and I scouted out a venue for the record attempt scheduled for the next day. The square with the statue of David was too crowded so we decided on a spot in front of the magnificent Basilica di Santa Maria del Flore Cathedral right across from our hotel. 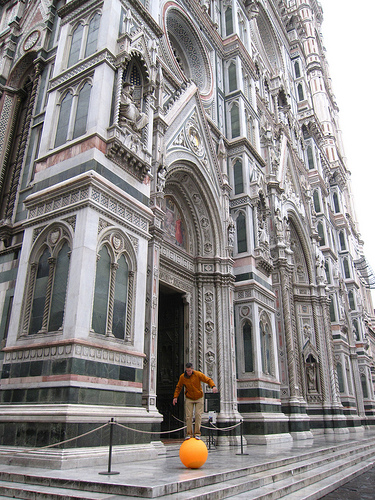 The next morning, we rounded up the official witnesses, got out the video cameras and I climbed onto the ball. Fortunately, I had the foresight not to invite the media because, within seconds, I proceeded to fall off the ball! I tried again and again but my balance got worse and worse. It was the curse of the frog hopping! I just had to laugh and promise to myself that I would attempt the record again once I returned to New York. In the meantime, Priyadarshan and I explored the museums and restaurants of Florence and Tuscany and we eventually met up in Pisa with our buddies Sanjaya and Tejvan who had flown in from London to join us. 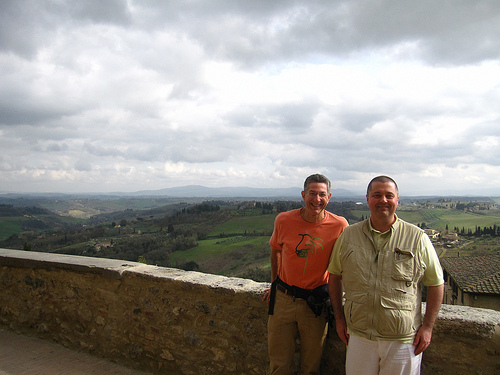 Although it lacked the artistry of ball balancing, the frog hopping record attempt in Pisa went off without a hitch. I knew that unless I lost the grip on my toes due to the moisture on the grass, the only thing that might upset the attempt would be if the police arrested me for hopping on the lawn without a permit! That seemed unlikely, but just in case, we scheduled the attempt for 7 am. When we arrived at the Leaning Tower that morning, to our relief, the place was deserted. The police did eventually show up while we were measuring the course, but they didn’t seem to mind our unorthodox proceedings. After the record, a kind policewoman even offered to take our photos! 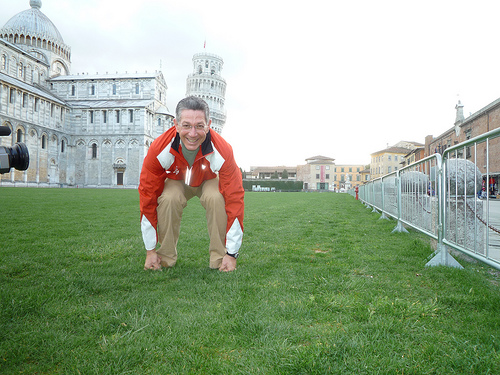 Once back in New York, I resumed training on the globe and, after about a month, I decided to make another attempt. I had progressed back up to my old standard and I was eager to establish the record. On the day of the attempt, just a few minutes before the witnesses were due to arrive, I realized that I didn’t have any blank tapes for the video camera. Obviously, planning ahead is not one of my strong points! With no time to go out and buy a new tape, I dug up an old tape with some preexisting footage. There was 44 minutes of blank space and I reasoned that was more than enough since, after months of practicing on the ball, I had never even managed to crack the 30-minute mark.

Everything was set. At a signal from one of the official timers, I got up on the ball and my friend, Vinaya, began filming. I felt shaky from the start and, sure enough, after only 3 minutes, I toppled off. Embarrassing! I tried again and this time I could only manage slightly more that 5 minutes before falling off. Vinaya rewound the tape and I got up on the ball for the third time, but things did not look promising. The arches of my feet were already beginning to ache.

And then it happened. For me, there is no other explanation except that God’s Grace descended. Out of desperation, while balancing on the ball, I decided to meditate on a photo on the wall of my spiritual mentor, Sri Chinmoy. I forgot about all the past failures and felt a profound peace and harmony within. Every five minutes my friend, Steve, called out the time. “Five minutes, ten minutes, fifteen minutes, twenty minutes…” 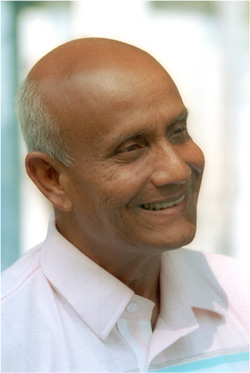 I was amazed and had the strong feeling that everything happens the way it’s supposed to. After returning from my trip, I had reviewed the Guinness’ rolling globe record rules and noticed that it was required to balance barefoot. Somehow, I had previously overlooked that guideline. I had been wearing shoes while making the attempt in Florence so, even if I had succeeded in staying on the ball, the record wouldn’t have counted!

Back to the record attempt. The time flew by. When Steve called out, “40 minutes”, I suddenly remembered that there were only 4 minutes of tape left. Vinaya made a frantic search for another video camera and tape but, amidst all the hubbub, I lost my concentration and fell off the ball with only a few seconds left on the tape. It didn’t matter. I was elated and so grateful to have been blessed with such a powerful experience of self-transcendence.

Later that day, I happened to come across one of Sri Chinmoy’s aphorisms that struck a deep chord within me. I hope it inspires you as well:

Strength indomitable comes not from outer exercise but from inner awakening.