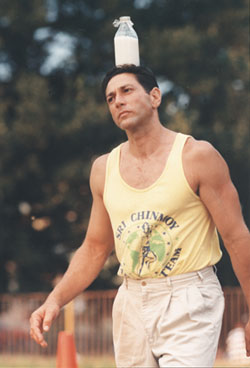 You have to walk as far as possible while balancing a full, old-fashioned pint glass milk bottle on your head. You can stop to rest or eat but the bottle can never leave your head. You are allowed to adjust the bottle twice an hour.

This is one of my favorite records because you look so silly on the outside (the record was appropriately enough first set by a clown!), while on the inside you are very seriously concentrating on the top of your head. If you get distracted even for a split second the bottle can slip off and the attempt is finished. Over the years, as the record has been broken and rebroken, the distance has increased dramatically, so now it is a test of extreme physical endurance as well as mental one-pointedness. 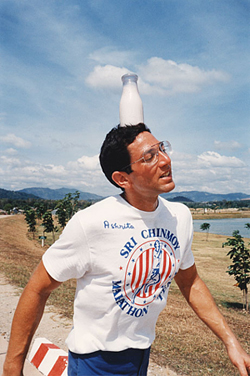 The reactions I get while walking through the streets practicing for this record are precious. In Japan, people politely pretend that nothing is wrong, but once I pass them I often hear muffled giggling. In New York, bystanders openly laugh, cheer, jeer or even throw rocks trying to knock the bottle off my head. One kid even used a slingshot! The most unique reactions were in Cancun, Mexico as I walked along the main boulevard in the tourist district. Onlookers would frequently try to startle me into dropping the bottle while I was determined to remain calm and maintain my focus. Throughout the day, teenagers would drive by in their cars screaming and honking their horns. One imaginative fellow snuck up behind me and barked like a dog in my ear! As I passed a golf course, I heard someone yell “fore!” and a golf ball bounced on the sidewalk ten feet in front of me. But the best was the city bus driver who crossed over to my side of the road, charged his vehicle through a huge puddle and drenched me in a shower of warm muddy water!