The Most 20-ounce Glasses Balanced On Chin 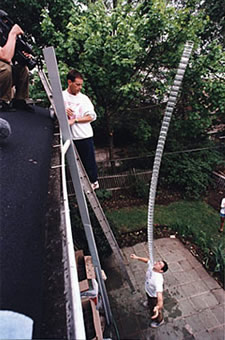 The glasses stack one inside another forming an immense single tower of glass which you have to lift off from a rack, place on your chin, and keep balanced (without using your hands) for 10 seconds. Those 10 seconds can seem like an eternity! As you stack the glasses higher and higher, the tower curves in the middle, arching backwards over your head. If you aren’t extremely careful while you are lifting or balancing the glasses, the middle ones can shatter, and suddenly you are looking up at 40 or more pounds of glass about to fall directly on to your face. That is the moment when it is wise to run for your life!

I first attempted to break this existing record of 50 glasses while on the Dini Petty Show in Toronto, Canada. Just before going on the air, I was warming up with stacks of 45 and 48 glasses but for some strange reason the glasses were breaking before I even lifted them off the rack. I decided to make the attempt anyway, so I set up 51 glasses, placed them on my chin and immediately heard a distinct cracking noise. It must have been fun for the audience to watch me, Dini Petty, the timers and even the cameramen simultaneously sprinting out of the studio in a panic!

During the commercial break, as I swept up the thousands of fragments of glass and set up a new tower, I still could not figure out what went wrong. Finally, I said a quick prayer and immediately got the answer – the heat of the powerful television lights must be somehow affecting the glass. So we opened all the windows and doors, letting in the freezing Canadian air to cool things down. Back on live T.V., although we were a little cold, we were all relieved when the glasses held.

I discovered once again that the God really does answer prayers.