Most Games Completed in 24 Hours

You have to abide by the British system, which uses 10 boxes instead of the usual 8, and a 3-foot space between the frontline and the first 2 boxes. All other hopscotch rules apply, such as not stepping on any lines and not stepping in the box the rock is thrown in, etc.

Although this record sounds like kid’s play, it is in reality quite exhausting. You have to be extremely dynamic the entire 24 hours and very accurate with the rock toss. The game of hopscotch is actually derived from a regimen used by Roman soldiers centuries ago to maintain their fitness and agility. 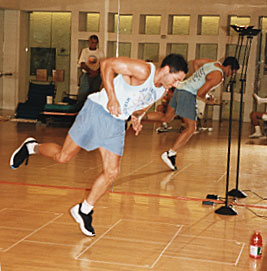 That is quite apropos because the second time I attempted this event I was in Myanmar (formerly Burma) and one of the most enthusiastic witnesses was a high -ranking member of the military. Although I was game, I started the attempt with a case of the flu and after about 12 hours I just couldn’t go on anymore. However, the disappointed general kept insisting I continue!

I later broke the record upon my return to New York. My teacher, Sri Chinmoy, came for a short time to watch and encourage me. A perfect game in hopscotch, in which you get the rock in every box without a single miss, is very rare. I had been playing for hours without getting even one perfect game, but as soon as my teacher arrived, I scored two perfect games in a row. When I missed late into the third game, my teacher seemed surprised and asked me what was wrong! He showed me there was a whole new level of concentration I had never even imagined.