My spiritual Teacher, Sri Chinmoy, teaches that the inner life and the outer life must go hand-in-hand. Whenever we do something outwardly, if we can touch it with our spiritual effort,  we can accomplish things way beyond our imagination!

I could be accused of being consumed with record-breaking, but really, for me, it is much, much more than that. Breaking records has become an important part my own spiritual quest. Inwardly, the process of breaking a record requires me to go within and depend on the Divine Grace. Outwardly, whenever I break a record, I get tremendous joy and inspiration and hopefully I inspire others as well – or at least make a few people smile!

So, I am always looking for new ideas for world records. Sometimes, I’ll go through the Guinness Book and some record will jump out at me. Often, I’ll return to an earlier record which someone else had subsequently broken. And sometimes, an incident in everyday life will give me an idea for a new record that has never been attempted before. Enter the lunge!

I first came across lunges while taking a fitness class in 2002. The instructor asked me to do walking lunges across the gym. If you are not familiar with a lunge, you take a long step forward and then kneel with your forward leg while your trailing leg is fully extended behind you. It’s a great exercise that thoroughly works your quads, gluts, calves and abs. After about 50 of these, you can really feel it in those muscles. Well, after my 30 yards of lunges, I was hooked, and, of course, my next thought was, “Wow, I wonder if there is a record for these things.”

The next day I contacted Guinness and, to my amazement, there was no existing record for walking lunges, so I decided to propose one. Guinness records must be measurable and standardized so that each record attempt is performed in exactly the same way. I consulted a number of friends and fitness experts and we decided on two modifications to standardize the lunge: First, the knee of the trailing leg must touch the ground because anything less (like the knee having to be a maximum of 3 inches off the ground) would be too difficult to judge. We felt people could wear kneepads to protect the knee. The other standardization was about how far a person should come back up between lunges. Again, the only fair way seemed to be that the knee that had touched the ground (the trailing leg) had to be fully locked before the next step could be taken. 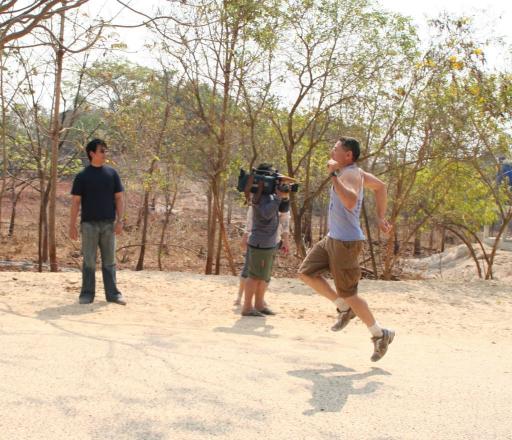 The next question was how long to make the distance. I thought a mile might be a reasonable distance because I had never gone more than 400 yards and that was tough enough. Of course, there is no guarantee that the Guinness people will go along with a recommendation. I had previously suggested a record for skipping, and based on my practices, 2 miles of skipping resulted in wonderful friction blisters. I was certain, therefore, that making the category the fastest time to skip a distance of 5 miles would be setting a high standard. When Guinness wrote back to me, I was delighted to find out that they liked the idea for a skipping record, but they insisted that the distance HAD to be a full 26.2-mile marathon! I prayed that Guinness wouldn’t have a similar mindset for a lunge record.

Fortunately, the people at Guinness in London must have realized how hard lunges are and accepted the proposed guidelines and distance. To give you some sense, as I mentioned earlier, after 50 lunges you really feel it. A mile requires around 1200 lunges! 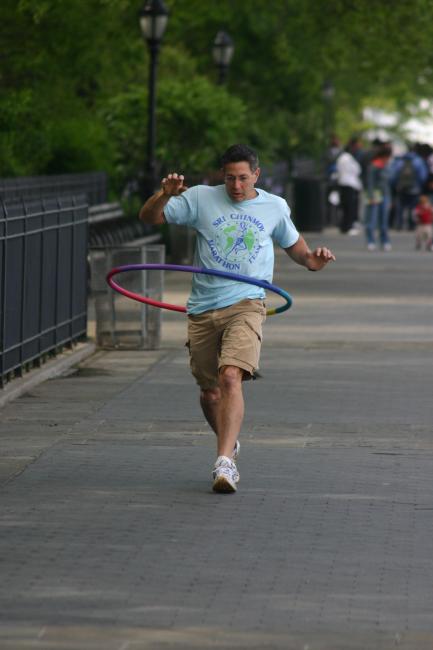 Well, after a few months of practice, I was able to set the record in Germany at a record-breaking event called Impossibility-Challenger. Impossibility-Challenger is a dynamic annual occurrence (there is now one in Auckland, New Zealand as well) filled with people performing all sorts of amazing feats of concentration, strength and endurance. It inspired me to break 3 records that day: First, I broke the record for the fastest mile covered while walking with a hula hoop spinning around the waist. Then I set the lunge record. My legs were already a little tired, but I was able to do a lunge mile in a little under 31 minutes. Finally, I was able to set the record for standing on a Swiss Ball. This was really all by Grace, because the lunges exhausted me and after only a short time during the third record, my legs began to shake uncontrollably!

Anyway, the walking lunge record lasted for several years until about a year ago when it was broken by almost 4 minutes. I was actually happy because it gave me an opportunity to practice another aspect of Sri Chinmoy’s philosophy – self-transcendence. Sri Chinmoy says that there is no end to our progress, that as soon as you accomplish one goal you should have your sights set on a higher goal. As soon as I began doing lunges again, my appreciation for them was renewed and I began to enjoy the intense practices. (My friends could tell whenever I had a tough lunge workout because I would walk funny for the next day or two!) 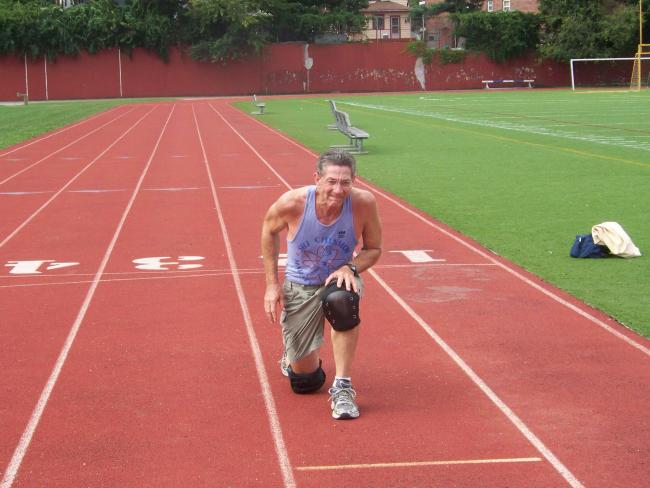 Well, it was back to training and several weeks later I attempted the lunge record again. As far as I could tell, I was able to break the record and, according to the witnesses, my form was excellent. This time I locked the correct leg! I sent in all the evidence to Guinness including the video and, hopefully, they will accept it. Either way, I think I’ll be practicing lunges for the foreseeable future. I just recently discovered that there is a newly established category for the fastest 10 kilometers of lunges. That’s 6.2 miles! What were those people at Guinness thinking?!

Actually, the challenge of the new record is exciting but, of course, self-transcendence is not just about breaking records – it embraces all aspects of life. As Sri Chinmoy so eloquently says:

” The fullness of life lies in dreaming and manifesting the impossible dreams.”