How to Get in The Guinness Book of World Records 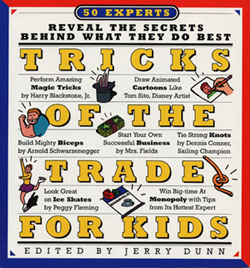 The holder of ten Guinness titles, New Yorker Ashrita Furman is unique in the field of world records. No one else has set more Guinness records in different categories – from doing jumping jacks to yodelling, from pogo-sticking up Mount Fuji to juggling underwater.

About one-Quarter of the records in The Guinness Book of World Records are broken each year. That's bad news for me, because if I want to hold my ten records, I have to beat every new challenger! But it's good news for you, because you have lots of chances to set a new record. You'll feel a real sense of accomplishment if you set a world record in anything, and seeing your name in the Guinness book is great fun.

Some of the categories are wacky, like spitting a watermelon seed for distance (the record is 68 feet, 9 1/8 inches). Some are unusual, like amassing the world's largest ball of string (the winning ball is almost 13 feet across and weighs 11 tons). Some categories are very hard, like somersaulting. I set the record by somersaulting 12.25 miles along the route of Paul Revere's famous ride in Massachusetts. Guinness rules forbid stopping along the way; they allow you to throw up, and that's about it. So a challenger has to overcome dizziness and nausea, exhaustion and pain. I did 8,341 somersaults.

I'm thirty-nine years old, but I consider myself a big kid, and my records are all for kid stuff-pogo-sticking for distance, playing hopscotch, walking 70 miles with a full bottle of milk balanced on my head, "joggling" (running and juggling at the same time), and that sort of thing. I've learned a few tricks for setting world records, and I hope they'll help you get in to the Guinness book, too.

If you invent your own category, Guinness probably won't accept the record. They have only a certain amount of space, and if a new record goes in, another one has to come out.

Look through the book until you find a category that appeals to you. That's how I settled on trying to break the yodeling record. I'm not even a singer, and I drove my friends crazy trying to learn to yodel. Finally, I yodeled for 27 hours straight I and set the record. It went into the Guinness book.

Another time, however, I pogo-sticked up the stairs in the tallest tower in the world, the CN Tower in Toronto. British television filmed it, and we hoped that Guinness would accept the feat. But it did not because there was no category for it. So remember: Picking a category that's already in the book gives you a much better chance.

If you do have an idea for a new category be sure to write or telephone the Guinness office first. The editors will say whether they'll consider it. If you tell them, "I'm going to see how many times I can stick out my tongue in ten hours," or "I'm going to bang my head against a wall one hundred thousand times," they'll probably say no. (Obviously, you shouldn't do anything dangerous or harmful!) But when I telephoned to propose pogo-sticking for distance, they said: "Well, it sounds like a good category. We can't promise to put it in the book, but go ahead and submit it." It helps if the stunt creates a lot of interest – which means competition from other challengers who submit claims in the same category.

And there's always a chance. Once I invented something called "land rowing," when I mounted an indoor rowing machine on wheels. Today land rowing is a Guinness category, and the current record holder rowed across the entire United States! Recently I thought up "gluggling," or juggling underwater. I put on a scuba tank, climbed into a tank of water, and juggled for 57 minutes. It's a new category, so I'm waiting to see whether Guinness will accept it.

Records printed in the Guinness book may not be the very latest ones. Records are broken all the time, and claims come in after the book is published. Be sure to call the Guinness office the day before you try to break the record. As an example of what can happen if you don't, I went for the record in the wall press category, which involves sitting against a wall as if you were sitting in a chair-but there's no chair. It's torture! Most people can do it for three to five minutes. The record was four hours and 45 minutes. I trained until I was ready to break it, but when I phoned the Guinness editors, they said they'd just received a claim from a man in India who had done the wall press for 10 1/2 hours. What if I hadn't telephoned? I'd have done the wall press for maybe six grueling hours, and my record wouldn't have counted. It would have been horrible.

If the stunt won't give you some joy, forget about it. A big part of setting a Guinness world record is to have a lot of fun!

Train by actually doing the stunt

If you plan to go for the record in jumping jacks, do a thousand of them, then two thousand the next time, then three thousand, and so on. It's good to do other exercises to keep in shape, but be sure to concentrate on the event in which you're trying to break the record.

Prepare as much as you possibly can. Think of everything that can go wrong. Then go on a trial run. I should have done this when I went for the record for deep-knee bends. Doing them in a gym is so boring that I hatched the idea of going up in a hot- air balloon. It turned out that the whole balloon dipped whenever I did a knee-bend, so I was fighting the motion of the balloon every time. Breaking that record was really tough, I should have given it a try beforehand.

Because things can never be planned perfectly, something will go wrong. When it does, you can't think: "Well, this isn't going to work. I didn't expect this to happen, so I'll have to stop and try again sometime." You have to go with the flow, as they say, Once I tried for the "joggling" record by running a marathon as I juggled. For the last seven miles I had a bug in my eye! There was no way to get it out, since I was juggling and didn't have a free hand. I just had to keep going.

Another time, when I started out on my land rowing record, I crashed after a few minutes and the machine got stuck in gear, I couldn't fix it, so I had to go the whole distance in the hardest gear. Actually, that setback inspired me somehow, beÂ¬ cause it was more of a challenge. There are times when you can turn an obstacle into an opportunity.

Make things easier on yourself

You can find ways to give yourself a break and still stay within the Guinness rules. In the hand clapping category, the claps have to be audible at 120 yards. I first tried to break the record in New York City at Lincoln Center, which is really noisy. Even though I clapped my hands as loud as I could, the witnesses could barely hear me. After fifteen hours I had to stop. I wondered how I could make things easier on myself the next time. Then I remembered that sound carries well over water, so I went to a pond. I clapped at one end and seated the witnesses at the other end. Guinness approved this plan. (Be sure to check with them ahead of time.) It was easier on me, and it didn't break any rules.

Another secret is to bring along a few friends to encourage you and offer advice. I remember that the night before I set the somersaulting record, I ate four slices of pizza. (I was doing something called "carbo loading," which increases your athletic energy.) The undigested pizza was sloshing around in my stomach, and I felt really sick. A friend who came along finally convinced me to drink some pure Coca-Cola syrup, which overcomes nausea. I wasn't thinking very clearly after somersaulting for miles, so my friend's suggestion really saved me.

Provide all the proof Guinness requires

Guinness can't send editors all over the world to verify it when people set new records, so you have to prove it to them. First, you need two witnesses. They can't be your friends: they must be people of standing in the community, like a school principal and a policeman, so Guinness will know that they're reliable and wouldn't lie. Also, you need an official logbook, which the witnesses have to sign at certain intervals. (When you ask Guinness to send the rules for your category, they'll include details on setting up your logbook.) You must do the stunt in a public place and provide a sheet of paper for passersby to sign their names, addresses, and the date. Also, be sure to send I Guinness a photograph of yourself taken during your successful attempt.

Finally, you need media coverage to confirm your record. I That's one reason why I do stunts in unusual ways or unusual places, so a newspaper reporter or a TV cameraman will show up. Once I pogo-sticked up Mount Fuji in Japan. The Japanese loved it, and I got national press coverage.

Feats like juggling require a lot of concentration, and even the a boring ones (like clapping) demand that you pay attention to one thing for a long time. A very simple exercise is to look at something-a flower, a picture, or any object-and try to think only of that. Even within three minutes you'll find that your mind wanders all over the place. As soon as it does, bring it back to that object. Practice every day. Once you get to three minutes, then go to five and then to ten minutes. When you can focus on something for ten minutes, you're doing very well. That kind of concentration can help you set a Guinness record. If you do get in the book, you'll feel a great sense of accomplishment. That's why I do these crazy things. Going for a world record is a wonderful challenge, and the person you challenge really isn't the individual who holds the current record – it's yourself. Never give up!