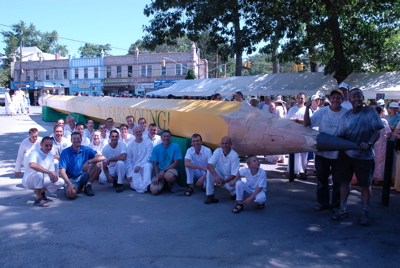 Well, we did it and we had a blast! A bunch of guys from about 15 countries spent 2 weeks building the world’s largest pencil. It wasn’t easy. We had to make the pencil to scale, it had to look precisely like a normal pencil and it had to be made out of exactly the same materials. We used over 8,000 board feet of wood, 4,500 pounds of 10-inch graphite, which ran the length of the 76-foot pencil, and we even manufactured a 250-pound eraser. It took our two main carpenters a full day to sharpen the point of the pencil using a Sawzall, axes, and a grinding machine!

The pencil was designed to commemorate Sri Chinmoy’s 76th birthday. Sri Chinmoy is a highly prolific writer and artist, so we thought presenting him with a giant writing instrument would be appropriate. About 10 years ago, we built a 20-foot pencil for Sri Chinmoy, but, a few years later, the European pencil company, Faber-Castell, constructed a 64-foot pencil to erase (pardon the pun) our record. I wouldn’t have thought of getting the record back except, this past December, I happened to meet the renowned Count Faber-Castell at a vacation resort in Turkey. We became friendly and I mentioned that I had the hope of someday regaining the pencil record. He suddenly became very serious and retorted, “Impossible, you’ll never do it!” That was a challenge I just couldn’t ignore! 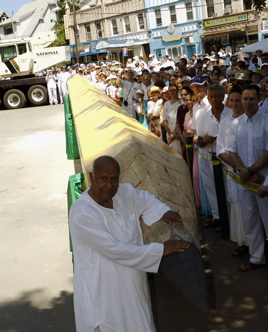 Sri Chinmoy seemed to appreciate the pencil, and he even spent 5 minutes creating a line drawing by moving a piece of Bristol board across the pencil tip. Then, to make the birthday even more memorable, we called the Unique Rigging Company, whom we had contracted, and informed them that we were ready to begin the next phase of the celebration. We hoped they could live up to their name and do something truly unique! Using a 100-foot crane, they would try to lift the pencil into a vertical position! You could feel the tension in the air. We had put a lot of effort into making the pencil exceptionally strong, but still, there was no guarantee that the pencil wouldn’t crack in half under the strain of being lifted. That would be a horrible way to end the festivities! 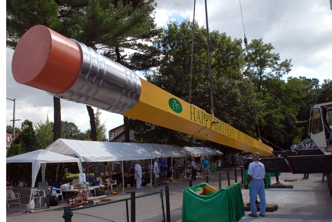 We moved all of the spectators to a safe distance and asked the lady in the house closest to the pencil to stay inside. We reassured her that, if the pencil broke, her house wouldn’t get hit. Still, she was nervous. We fastened 2 special steel cradles onto the pencil and the crane guys rigged up our birthday present to their 40-ton crane. As the pencil was lifted off it’s base, the crane operator noticed that the pencil registered a much heavier weight than we had estimated. Including the steel cradles and bolts, our work of art was more than 22,000 pounds, approaching the limit of the crane’s capacity. To be safe, the crane operator went extra slowly but, within minutes, to the cheers of more than one thousand spectators, our 7-story pencil was vertical and, still in one piece! 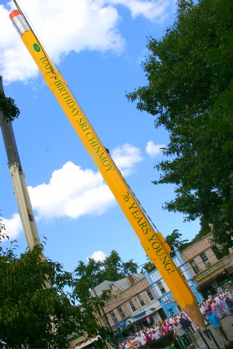 We spread considerable joy, but now that the celebrations are over, the big question on everyone’s mind is – WHAT DO WE DO WITH THE PENCIL? My friend, Bishwas, a chief engineer involved in the project, calculated that we could make almost 2 million regular-sized pencils from our record-setting creation! I was hoping to donate the pencil to a children’s museum or park, but so far we’ve had no takers. Another friend suggested calling the Governor of Pennsylvania and asking if he would want to put the pencil at a prominent spot along one of the state’s borders. They could paint on the pencil, in big bold letters, “Welcome to Pennsylvania”!

My pal from Seattle contacted the Ripleys Museum in India and they seemed interested, but how do we get our 11-ton pencil over there? A doctor I know had another idea. He hails from Texas and he was sure someone in the “everything is bigger in Texas” state would be enthusiastic. Texas got a second vote from another friend who is related to the guy in Amarillo who owns Cadillac Ranch. She thought that he might want a giant pencil stuck in the ground to keep his ten upside down Caddies company! 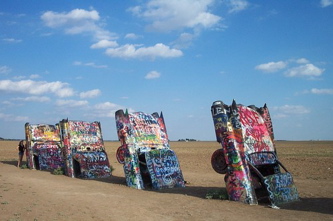 One thing is for sure, though. Wherever the pencil ends up, it will create a sensation. Even in New York City, we didn’t go unnoticed. After the pencil got lifted, two New York policemen called on us. It seems that our pencil showed up on satellite surveillance photos and the officers were told to come over immediately and investigate. When the cops showed up and saw that it was only a pencil, they broke up laughing. I have to admit, from a certain angle our beloved pencil does look like a missile. It’s too bad we can’t just attach some engines and send it off into orbit! 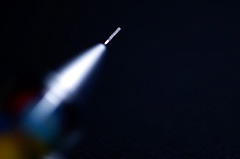