I get tremendous joy whenever I visit Italy, a joy that starts weeks before I embark on the plane! About a year ago, I was about to head out to the airport to pay a visit to my Italian friend Priyadarshan who lives in a beautiful city an hour north of Verona. Because I tend to get restless sitting still on long plane trips, I decided to expend a little excess energy by sneaking in a quick run. At that time, I was training to break the Guinness record for the fastest mile run while balancing a milk bottle on the head, so I decided to do my run with the milk bottle. I quickly cycled over to Jamaica High School track, but was disappointed to find the 10-foot high gates locked. Normally, I would have headed over to another track in the neighborhood, but because I had very little time, I just hopped the fence to get my run in.

I love running with a milk bottle on my head. Although it is silly, it still requires a high level of concentration. Well, after a couple of laps, along the fence at the far side of the track, I heard what sounded like a dog running alongside me! I could hear his dog tags jiggling and his loud panting. I was running alone inside a gated track, so I imagined the dog had to be running on the outside of the fence, and he had to be large since I could hear him so distinctly. Of course, because I was concentrating on the milk bottle, I couldn’t turn my head to look. On my next lap around the track, again I heard the dog but this time my curiosity got the best of me. I took the bottle off my head to investigate. I was shocked to see that the dog was actually inside the track running alongside me. And it was no large dog. No – it was a tiny dachshund! 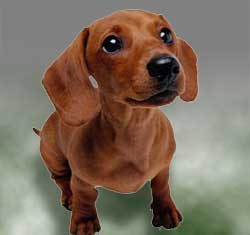 The little guy was playing with me, running large circles around me with his leash trailing behind. I was surprised and delighted at the same time, but where was the owner? Sure enough, across the field, outside the tall gates, was a lady waving her arms and screaming at me. As I ran towards her, I could hear her saying, “Can you please catch my Trixie? She snuck through the gate, and she won’t come back.”

I immediately began the chase, but Trixie was a master of this game. Full of mischief, time and time again, she came barreling towards me and then, at the last minute veered off, while I made frantic lunges to catch her. After about 10 exhausting minutes, I was able to coax Trixie towards the gate where her owner was beseeching her to come back.

Trixie must have tired of the game because she finally let me grab her and became very docile, and I happily passed Trixie under the gate to her waiting owner. The lady was so grateful to have her naughty Trixie back in her arms. As for me, I was thrilled to have been in the right place at the right time.

Fast forward about a year to this past May when I was again due to take a flight to Italy to visit Priyadarshan. This time I allowed enough time for exercise. However, instead of running, I decided to do my final practice for the 5-kilometer (3.1 mile) skipping record that I was planning to attempt on the trip. I headed over to Jamaica Track but, unfortunately, history did not repeat itself. The gate was open and little Trixie was nowhere to be found. But that was OK – skipping is almost as much fun as chasing a dachshund!

The kind of skipping I’m talking about is like kids do, without a rope, when they are happy and just skip out of sheer joy. My spiritual mentor, Sri Chinmoy, says that if you smile when you are sad, the very act of smiling will help cheer you up. I think it’s the same with skipping. It’s almost impossible to be sad when you are skipping! Plus, there’s another benefit. It’s the perfect exercise – working the legs, arms and, especially, the crucial core muscles – the abdominals and the back. 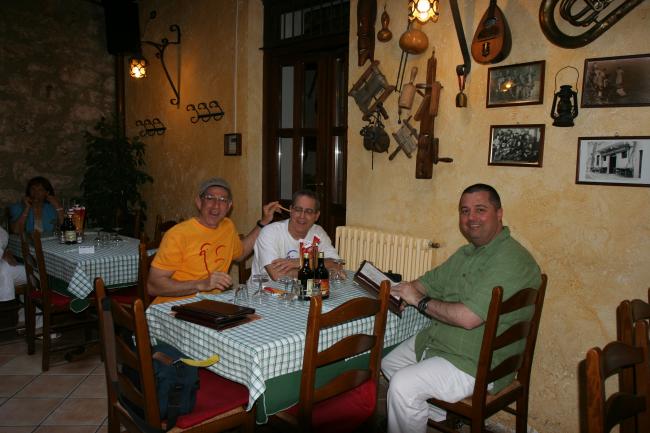 I was joined in Italy by two other good friends, Pradhan and Abakash, and, between the anticipation of doing the skipping record and being in Italy with my three pals, I was in heaven. In fact, it was my inability to contain my happiness and that got me into trouble.

While posing for a photo with the guys, I decided to surprise Pradhan by crouching underneath him and lifting him up on my shoulders. Well, I was the one in for the surprise! Pradhan was a bit heavier than I anticipated and, although I finally got him launched up in the air, I could feel something amiss in my back. Within a few hours, I was in considerable back pain. I couldn’t believe it. There was no way I could break the skipping record with a sprained back.

Anyway, we had only one more day left of the trip and, even though my back still painful, I was determined to attempt the record. Our original plans called for me skipping along a beautiful, scenic road in rural Salo, but we scratched those plans in favor of the more level and consistent surface that a track provides. About a half mile from Priyadarshan’s home is the local community track which we could use without a permit. Priyadarshan’s brother knew a newspaper reporter and informed him about the event. With all the pieces in place, Pradhan and I went to the local stadium at 6 a.m. the next morning to beat the late morning heat. There was only one slight hitch in our plan. When we got to the stadium, the 9-foot high gate at the entrance was locked. If we wanted to get in, we would have to climb the fence!

Pradhan was the first to jump the fence, and of course, I immediately thought of Trixie, but then the thought occurred to me that it just might be a much larger dog greeting Pradhan as he made it over the other side of the fence! Fortunately, the stadium was totally empty, and we both made it over the fence without incident. The track was designed for track and field events, so we were able to easily make our measurements and find the preexisting 5K marker. Pradhan manned the video camera, the official witnesses took their positions outside the fence, and I began the attempt. As I circled the track, the joy of the skipping kicked in. I forgot my pain, and settled into a comfortable pace. 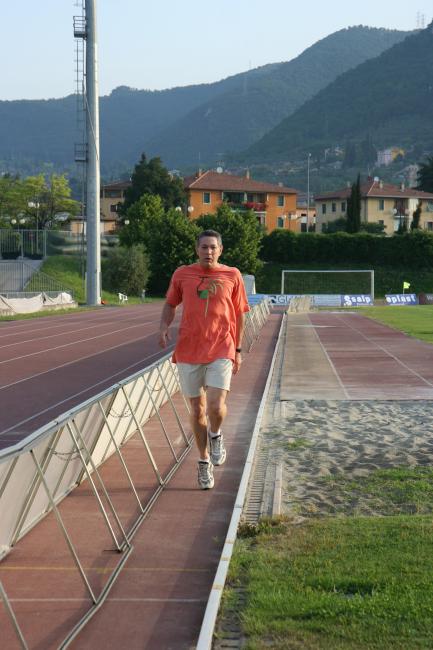 Suddenly, I noticed that an official from the stadium had opened the gates and was talking to my friends. I thought, “Oh God, he’s mad that we snuck into the stadium. Please don’t let him kick me off the track.” Fortunately, when I skipped by the official he just smiled and let me continue on my merry way. With my friends cheering me on and with gratitude in my heart, I managed to shave more than 3 minutes off the old skipping record.

Afterwards, my pals and I celebrated over one of Priyadarshan’s mother’s delicious home-cooked meals. My friends filled me in on what happened with the official at the track. He simply wanted to know what I was doing – and asked if I was breaking a Guinness record! Somehow he knew, and the skipping seemed to put him in a good mood. 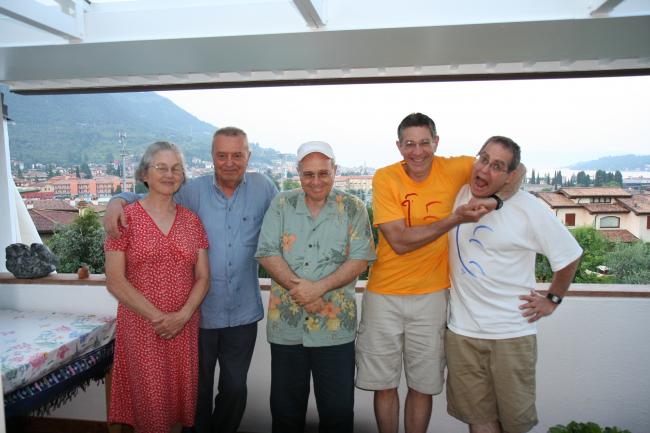 We all agreed that skipping has that kind of effect on people. I recalled an incident that happened several years ago in Victoria, Canada when I was attempting to set the record for skipping an entire marathon. About halfway through, one of the bystanders, who looked like he hadn’t smiled in years, yelled out as I skipped by him, “Hey, what are you doing?” I shouted back, “I’m skipping a marathon!” To which he instantly responded with a twinkle in his eye, “So what? I skip marathons all the time!”