My Folly in Bali

One of the greatest blessings of my life has been to travel to different parts of the world to attend Sri Chinmoy’s concerts dedicated to world harmony. This would also present the opportunity to attempt a Guinness record in a foreign country. It has made for some interesting sightseeing – I explored the Great Wall of China while hopping on a kangaroo ball and I experienced the power of Ayer’s Rock in the Australian desert while hula hooping! 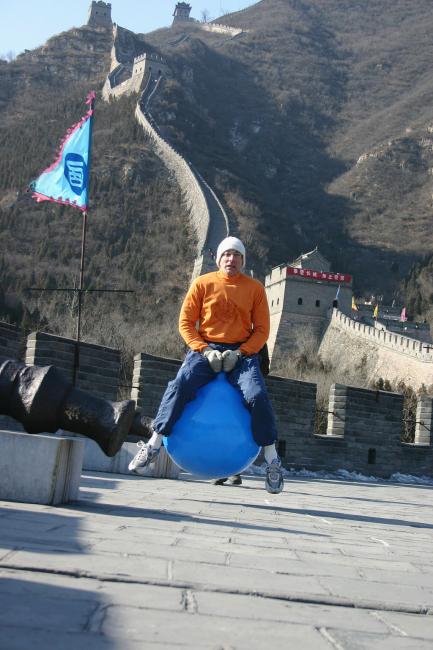 A particularly fun part of breaking records in other countries is observing people’s reactions to my – admittedly wacky – feats. How people behave says so much about their culture. For instance, Japan is an incredibly polite and reserved society. As I pogo sticked up the foothills of Mount Fuji, the Japanese appeared to hardly notice, acting as if seeing someone hopping up the mountain was an everyday occurrence. However, as soon as I was a few yards past them, invariably I would hear delighted giggling.

At the other end of the spectrum are the Malaysians. The Malay people are incredibly proud of their national achievements and all kinds of Guinness type events are officially encouraged. They even have their own book of records! When I visited Malaysia, I was surprised to find myself looked upon as a minor celebrity. Everyone bent over backwards to accommodate me, and I incredibly got permission to attempt the underwater juggling record in the country’s main aquarium. Minutes before the event, the director of the shark-filled aquarium told me not to worry – he would have divers in the tank ready to come to my rescue. I might get injured, he said, but he reassured me that I would make it out alive! 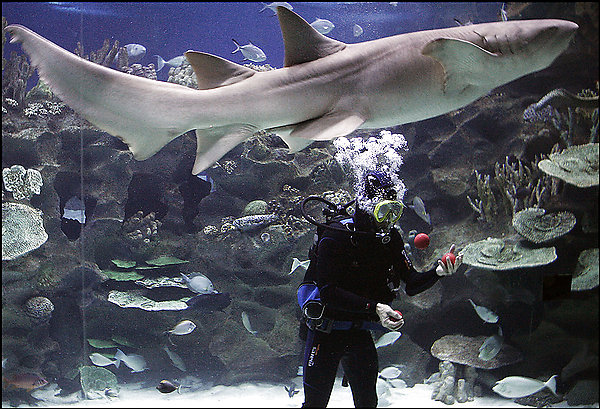 Last February, I was in Bali for a week. I was eager to attempt the record for the most deep knee bends in a minute while standing on a balance board, but finding an interesting location on the island was proving to be difficult. Then, suddenly, an idea came to me in flash – why not break the record while standing under an elephant?! Several elephant parks catering to tourists had recently sprung up in Bali, and the knee bend record would be a great excuse to bond with those profound creatures – that is, the elephants, not the tourists!

My next challenge was to find an elephant big enough to pull the stunt off. I happened to bump into my friend, Utpal, in the lobby of our hotel and I asked him to measure my height while doing squats on the balance board. I had previously broken the record in front of the Colosseum in Rome, but I was fully standing when I finished each knee bend. Utpal and I discovered that, by hunching over, I could still manage to straighten my legs at the end of the exercise without my back going higher than 4½ feet. Could we find an elephant with that much clearance room underneath its stomach? We couldn’t wait to find out, so we grabbed the balance board, a roller and tape measure, and hailed a taxi to take us to the nearest elephant camp.

In the middle of the 45-minute ride to the village of Bakas, it dawned on me that perhaps we were a tad unprepared for the upcoming exploration. I hadn’t called to set anything up with the elephant park, and I didn’t even have a Guinness Book with me to establish my credentials. Utpal reassured me that I was being overly concerned, and that we should just go with our gut. So, with great confidence, we walked up to the desk at the elephant park and asked to speak to the manager about a fantastic proposal. 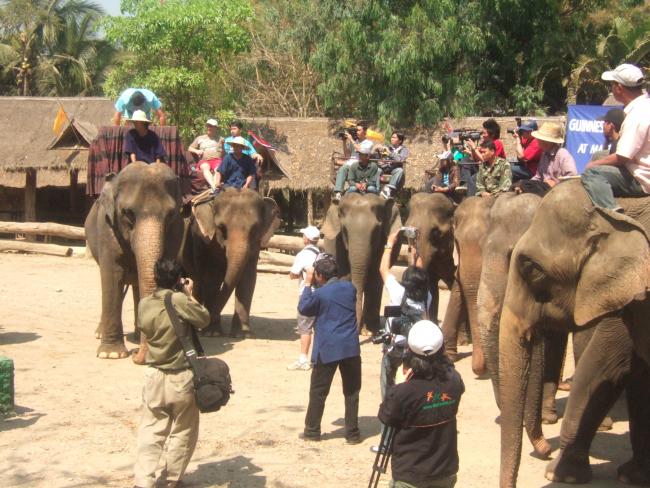 I was optimistic because this was not the first time that I made a proposal to the manager of an elephant park. In 2006, when I last visited Thailand, I came up with the idea of trying to break the record for the most squat thrusts in a minute while balanced on the back of an elephant. The manager of the Maetaman Elephant Park loved the idea and even helped design the platform I would use. In fact, the park was so into the project that for the actual record attempt, all the officials and media people were provided with elephants so that they could get a better view!

Unfortunately, my fortunes in Bali were not as good. The lady at the front counter of the Bakas elephant park informed me that manager had already left for the day, and the only one who could listen to my proposal was the head elephant trainer. He looked like a nice enough fellow so I set up the balance board in the lobby and, in front of several of the staff, I began doing deep knee bends. As I vigorously pumped out the squats, I explained to the trainer that the current Guinness record for the exercise was 38 in a minute, and I asked what he thought of my plan with the pachyderm.

He didn’t answer. He just stared at me in disbelief. I looked around at the rest of the staff. They all had the same baffled look on their faces. I reiterated the Guinness rules, but once again I was met with blank stares. And then a sick feeling came over me – was it possible that these people had never heard of the Guinness Book?

Sure enough, after getting the nerve to pop the question, my fears were confirmed. And with that, I realized that these people must think that I’m a total lunatic! Here I am, a loud American, barging into their place without an appointment, doing some weird balancing exercise and rambling about trying it out under the stomach of an elephant! I sheepishly apologized and, as Utpal and I retreated into a taxi and pulled away, we could see everyone in the lobby shaking their heads and smiling from ear to ear! 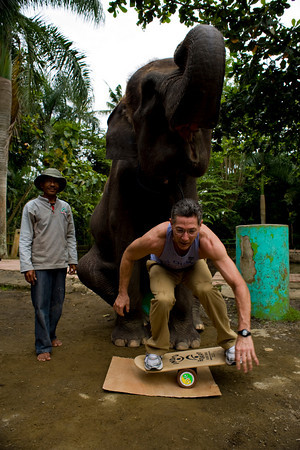 “Never give up!” is one of Sri Chinmoy’s favorite mantras! Several days later, I was able to reach the manager of the park by phone and arrange a meeting with him. Fortunately, he was familiar with the Guinness Book and was happy for me to attempt the record. With that commitment, he left the elephant part up to the discretion of the trainer. When I arrived at the park on the day of the event, the trainer greeted me and we both broke into laughter. The lunatic was back!

The trainer couldn’t have been nicer. None of the elephants were big enough to crouch under, so he suggested that I do the squats under a tame 16-year old female elephant while she sat on a concrete pillar. And as it turned out, there was just enough room under her jaw to make it work. After a few failed attempts, I was finally able to manage 39 deep knee bends in the allotted minute. 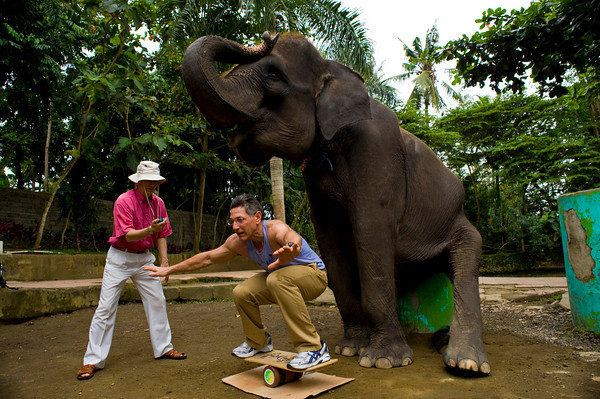 My quiet relief was counterbalanced by the trainer’s unbridled excitement. He let out a loud shout of triumph, and then he gave the elephant a garland of flowers with instructions to place it around my neck! 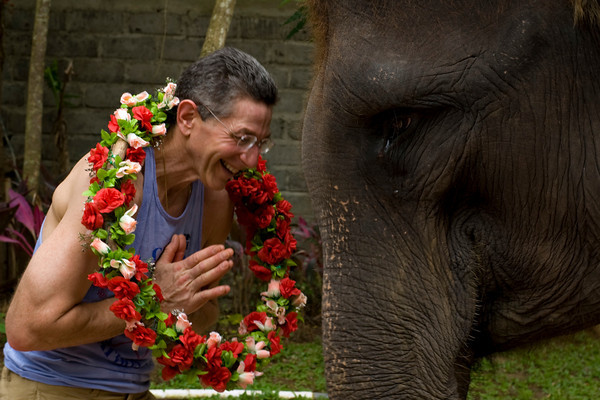 Afterwards, the trainer and his assistant decided to test their luck at doing some knee bends on the balance board knowing full well they were about to make fools of themselves. Then my friends tried it as well. We all spent the next several minutes hysterically laughing together at the ensuing disasters. I left the park grateful to have discovered that the Balinese were a people who I could truly relate to, and that their joy and childlike enthusiasm were highly contagious!