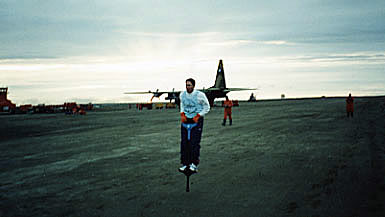 This is an intense event because the pogo stick is simply not an efficient mode of transport, although it’s lots of fun.

I first set this record in Antarctica. I was in South America and the Argentinian Air Force graciously allowed me and a couple of friends to hitch a ride there on a military transport plane. We flew into the “white continent” and had 90 minutes to locate and measure a course, break the record (with observers from the base as witnesses) and get back on the plane before it took off. It was C-O-L-D! The spring on the pogo stick froze near the 3/4 mile point but I still managed to crack 18 minutes for the mile. I later overcame the 13 -minute barrier at Iffley Field in Oxford, England where one of my heroes, Roger Bannister, first broke the 4-minute mile. My greatest obstacle there was the summer heat! 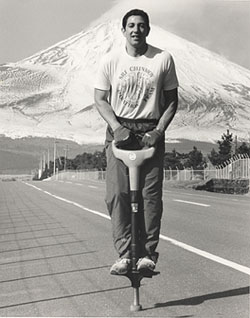 Legend has it that the pogo stick was invented by a Burmese farmer so his daughter could cross the nearby muddy road without ruining her shoes. I don’t think the farmer ever imagined that one day people would be competing with each other to see who could last on his contraption the longest. Guinness allows you 5 minutes’ rest after each hour of jumping.

I’ve covered more than 23 miles on a pogo stick, but my favorite pogo stick adventure was climbing 11 1/2 miles up and down the foothills of Mount Fuji. While speeding across Japan in a bullet train, I spotted Mount Fuji sparkling in the distance through the window and I was stunned by its majestic beauty. I knew I just had to climb it on a pogo stick! Since I was leaving the Orient in a few days, there was no time to waste. I had my pogo sticks flown over from New York, alerted the media and, with helpers and witnesses in tow, ventured into the unknown.

It was one of the highlights of my life. It was exhilarating ascending towards the snowline and breathing in the fragrant and crisp, thin mountain air. I had a powerful meditation at the turnaround point. Contrary to what I expected, going down was a lot harder, since I was already tired and had to use all my strength to avoid bounding downhill uncontrollably.

It was such an enjoyable experience that seven years later I decided to try it again, increasing the distance to 16 miles. My handler was a professor of biology who used to raise butterflies as a hobby. As I was racing down the mountain in the pouring icy rain, deeply concentrating on not sliding off the road and trying to finish before I cramped up, I saw the professor in the distance frantically waving his arms. “STOP, STOP!” he cried out. I thought there must have been a serious accident or something, but, both to my relief and disbelief, when I reached my friend he pointed to a big, brown, ugly moth perched on a tree. Excitedly he exclaimed, “Look, it’s the rare Lepidoptera saturniid! Isn’t it marvelous?” 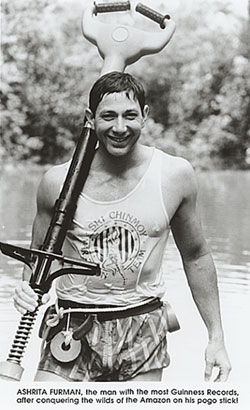 I proudly call this event “aqua pogo”. On April Fool’s Day quite a while ago, Good Morning America predicted this new anti-gravity sport would soon sweep the nation. Fifteen years later, it still hasn’t caught on, although I heard that some bloke in Australia tried it one time. It’s really easy once you get the hang of it. Using a mask and snorkel, you jump into 8-10 feet of water with your favorite pogo stick, sink to the bottom of the pool, lake, river, etc., and then slowly bounce back up to the surface where you get air and descend once again. It is quite serene and meditative, but expect to swallow a few quarts of water during the learning process!

I first set the record of 3 hours and 20 minutes in a neighborhood YMCA pool, but while on vacation in South America, I got inspired to surpass the record in the Amazon River. A couple of friends and I flew into the jungle in Peru, took a speedboat down the Amazon and then a dugout canoe along one of its tributaries. I asked the guide if the location he chose had any piranhas, but he just laughed and pointed to the black water 50 feet away. That was not the reply I was hoping to get. To play it safe, I had a sturdy rope tied around my waist that my buddies on shore held on to, but I later found out that if the man-eating fish did attack, by the time I got reeled in, all they would get would be the pogo stick! Anyway, I didn’t realize the bottom of the Amazon is composed of a thick clay, so I got stuck several times before discovering a spot on some submerged tree roots. At one point, a water snake wrapped itself around my leg, but having never encountered a jumping animal like me before, I presume it got frightened, because it quickly let go.